In the 22nd in a series of posts on 2015 books entered for The Story Prize, Joy Castro, author of How Winter Began (University of Nebraska Press), discusses her literary touchstones. 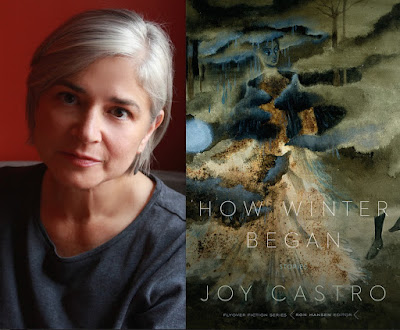 For literature professors, rereading books is a pleasant hazard of the job, and I've returned to many moving novels, essays, and poems over the years. My favorites, though, have been Sandra Cisneros's The House on Mango Street, Katherine Mansfield's stories, and Jean Rhys's Voyage in the Dark.

The House on Mango Street was Cisneros's breakout book, the one that famously put her on the map as a major force in American letters and a progenitor of the Latina boom in the 1980s.  It's a stunning collection of vignettes that arc like a novel. The language is lush, the imagery vivid and frequently synesthetic. It's a coming-of-age story of a Latina girl living in poverty in Chicago, but it's also a Künstlerroman, and its culmination resonates with the end of the epic Gilgamesh. That is, while it's accessible—and even deceptively slight—it's also complex, layered, and brilliant. But it's understated about its achievements: It's deftly, effortlessly powerful, not showy or straining.

I love the story behind the story, too: Cisneros had grown sick of the hothouse atmosphere of the prestigious MFA program she was attending, and when the workshop group had to read Gaston Bachelard's The Poetics of Space, in which the house symbolizes a source of shelter and protection for the dreamer, she decided to write instead about the kinds of dwellings she had known as a poor girl growing up with racism, about instability and poverty and shame. And that material unleashed her voice.

Katherine Mansfield, known for her brilliant short stories, is credited (along with Chekhov and Joyce) with being one of the three key shapers of the form for the twentieth century. She works with a light, precise hand, focusing often on children and families, and often on class divisions. (Mansfield, who grew up in a comfortably bourgeois home in New Zealand, was disinherited for choosing a bohemian, artistic life in Europe, and struggled with a variety of troubles until her death at 34.) From Mansfield, I learned about the craft of rhythm in epiphanies and the power of color imagery. Her stories, swiftly and nimbly told, often pivot on an episode of quiet violence. They're unforgettable.

Jean Rhys's Voyage in the Dark is less well known than Wide Sargasso Sea (and less scandalous than Quartet), but it's my favorite; it talks back in crucial ways to Conrad's Heart of Darkness, and in terms of content and style, it's utterly fearless. It was the first book Rhyswrote (though not the first she published; she carried the manuscript around in a suitcase for years), and it's a stunning evocation of a displaced young woman alone, penniless, and powerless in a large city.

It's also a clear-eyed exploration of the legacy of colonialism and slavery in the Caribbean, where Rhys and her protagonist were born and raised, and of how we cannot leave the past behind—how it continues to work itself out upon and through our bodies and psyches.

In her prose, Rhys makes radical, fearless leaps, assuming the intelligence and creativity of the reader. I like that respect, and I try to show it to my own readers.  Spelling things out is the condescending kiss of boredom, and Rhys always keeps us awake.
Posted by The Story Prize at 9:45 AM