Kirstin Allio on Reading the Newspaper Before Sitting Down to Write

In the 27th in a series of posts on 2016 books entered for The Story Prize, Kirstin Allio, author of Clothed, Female Figure (Dzanc Books), discusses finding poetry in newsprint. 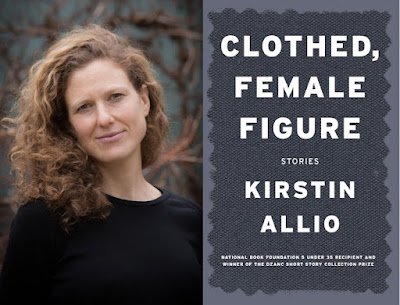 I still make my sons’ school lunches even though they’re teenagers, and when I get a compliment on a particular PB&J my heart still soars. Then they’re out the door on ten thousand horses—they’re always late, they jump the stairs, the dust they raise, the clatter echoes down the sidewalk. I put the milk away. Silence—as if I’ve been tossed up above the day, and the air holds for a few seconds. Exhale—I lean over the newspaper on the kitchen counter. The material of the world. Leaves of trees, footprints of thought, tight poetry, broad comedy, specific tragedy. It takes 70 pounds of hay and 15 pounds of grain and half a cup of mineral salts and 35 gallons of water to make six gallons of milk, one milking’s worth. How much does it take to make today’s paper?

I grew up without the newspaper: my childhood was counter-cultural, spiritual instead of political. Eyes closed in meditation rather than open on the headlines. When we visited my mother’s parents, my grandparents’ inviolable morning ritual was to trade sections of the newspaper at the breakfast table. (Raisin bran sprinkled with wheat germ, skim milk thin as paper.) My parents stalked off; my grandfather wiped tears of laughter (“lahf-ter”) from his pale eyes as he shyly passed me the “funnies.” My grandparents sent clippings by mail several times a month, annotated in the margins. I never read them. 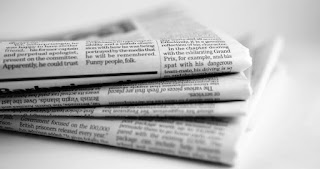 But here’s what happened in my own story: I moved in with the native newspaper reader who would become my husband. At first I had no idea how to wield it, not to mention read it (the newspaper and the relationship, but this is about the newspaper)—standing up, or sitting down? The wing-sound as the pages turned, the wingspan, the inelegant bird was as big as a tent, unfolded, and caught the slightest draft from an open window. I was, at the time, an MFA student. I assumed the paper was all foreign wars and corporation business, and I considered reading it a kind of safari (Land Rovers, tiger trophies), a visit to another world populated by elites burning cocktail conversation calories. I hadn’t imagined there would be continuity in the news stories—that you were inducted, and rewarded by reading daily—and I hadn’t bargained for the masterful, measured writing.

Beginning my work day by reading the paper orients me, and calls me to attention. Reading, even touching those pages, measures the day, and gives me a barometer of mind and mood. Am I open? Sentimental? Critical? Quick to absorb and empathize, or quick to dismiss, judge, and categorize? Reading the paper brings stories, and words to the fore. New words like seeds suggest, incite, excite me. I wish my grandparents could see me now, a zealot with scissors. I have shoeboxes of ivoried pages like precious textiles, family linens. I hoard stacks of sections in my office, notebooks glued with cut-outs, collages I’ve constructed over years, waiting, ambushing, editing, just like I do with short stories. Text fragments thrill me, photographs of art and dance are, themselves, art objects, I cleave to clever book reviews, ribald reviews of restaurants, tech reviews that portend both the past and the future.

The newspaper, like a poem, is at once whole and atomic, a cosmos and a microcosm. It might be difficult to get the news from poems, says William Carlos Williams, but it’s not so hard to get poems from the news.
Posted by The Story Prize at 8:50 AM