Lynn Stegner's Answer to the Question: "Why Stories?"

In the 23rd in a series of posts on 2016 books entered for The Story Prize, Lynn Stegner, author of For All the Obvious Reasons (Arcade Publishing), discusses why she's written a book of stories rather than a novel. 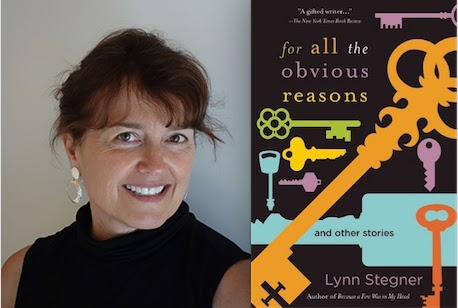 Why stories? Why not a novel this time, like all the last times? What is it that compresses a tale into this narrow frame, rather than brushing it across the sprawling canvas of a novel?

At some point in every novelist’s writing life, he or she begins to notice a silent accumulation of narrative passages, conceits, a measure here, a few chords over there, a lyrical line that keeps singing somewhere in the background. Each of these might have grown into the longer composition and commitment of a novel, as well as the complexity that a closer, more leisurely look exposes. After all, a novel must negotiate with Time, portraying its passage, conjuring the moods that characterize change, as well as generating the sense of movement that reflects the way lives are actually lived. But a short story begins after most of the developing action has taken place. We meet the players almost as they are walking off the stage…one last scene, one duet or ensemble and the curtain will drop. So everything that has come before this final scene must be already distilled within character, emblematized in a handful of causatively related events, or even left just out of reach and merely glimpsed in the imagination, or metaphorically presumed, the way you can almost feel the muscles of large birds as they fly overhead.

Someone I knew well used to say that short stories are a young writer’s game largely because they offer many more opportunities to try things out as a writer is maturing. To experiment without spending too much time. I’m not sure I agree with this. In a sense, there is a kind of extravagance to the form, and not because stories are dealing with truths and situations and characters nearly equal to what might be discovered in a novel but because each story has to be a whole world, just as in a novel. That’s quite an investment in a remarkably small piece of turf.

The word short then is mightily deceptive. A collection of nine stories, like mine, for instance, is nine worlds complete unto themselves, and each and all are creatively more work, entailing nine times the research and preparation, nine times the heart, and nine times the charge. They must exhibit economy and precision, penetrating to the central meaning with the flash and speed of a laser finding its mark. By means of a few brushstrokes, the writer provides enough to reveal what we need to know about a character—what he worries about, what she yearns for, and some of the life that they have seen before they show up on page one, even if that life can only be inferred. If in a novel details do double and even triple duty, in a story they are even more burdened with the job of communicating what is essential to making final meanings. Verbs cannot simply say what the action is, they must also qualify that action in such a way as to capture character, mood, habits, and even health. A woman who staggers into a meeting is clearly more interesting than one who walks. She’s got trouble; she has problems. And let us say that she slouches into that same meeting—that tells us something about her attitude, her position in the pecking order.

So for stories compared to novels (and with the exception of Time), the rules are the same, only more so.

Over the course of the years it took to write four, book-length narratives, I found that I had accumulated a number of story threads that, for one reason or another, did not want to be the fully rendered tapestries that are novels. Actually, that’s not quite true: One of them was supposed to grow into a novel, but the instant I sat down and began to write it, I realized that what was essential could be dramatized and brought to the light in less than twenty pages. It did not need a long distance to execute the necessary turns in the journey toward meaning and truth; it turned on a dime, or two. But another of the stories in the collection could have expanded into a novel easily, if I had wanted to spend that kind of time with those characters. I didn’t. I wanted to encounter them only at the borderline between the fictional life before and the suggested fictional life after—suggested because that fictional future is only gestured toward. It is there by implication and no more. Latent action—present, past and future—along with its import, is naturally occurring in novels and helps to inform the action that is front and center. But in short stories latency composes a whole ocean of content, while on the surface a few islands, a carefully arranged archipelago visible to the reader’s eye, comprises all that is actually available—the story on the page. Which turns out to be quite a lot.
Posted by The Story Prize at 4:02 PM