In the 31st in a series of posts on 2017 books entered for The Story Prize, Jeffrey N. Johnson, author of Other Fine Gifts (Meddler Press), discusses how studying architecture provided a good foundation for his writing. 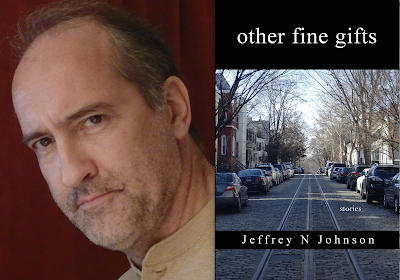 How did your architectural training prepare you to be a writer?
In September 1981, on the first day of design studio, our freshman class was herded into an auditorium to be introduced to our professors. The volume rose as the class assembled, everyone chatty and laughing and making a general ruckus. The room felt more like a high school lunchroom than a gathering of aspiring professionals. Amid the commotion, a potbellied man with unkept curly hair stepped to center stage and surveyed the crowd. He was clearly annoyed. Most of us hadn’t heard an accent beyond a rural Virginia drawl, so his stern Swiss voice carried great gravitas. He wagged a finger in the air and said, “There is no giggling in architecture.” The room fell dead silent. At that moment I was suffused with the seriousness and importance of the journey I was embarking on—this strange pursuit of the arts.

The late Professor Olivio Ferrari is legend at Virginia Tech. He had studied under Max Bill at the founding of the Ulm School of Design and later worked for him in Zurich, then went on to help mold one of the finest architecture programs in the United States. Under his guidance, the school was a place of inquiry. Ideas were paramount and ideas were to be questioned. Design was more than just drawing up plans. We were sent to the wood shop to get our hands on the materials. You might walk out of a lecture and realize you needed to take up photography, then you ended up spending the next semester in the darkroom. Some were encouraged to go to a mountaintop and practice their watercolors. It was a holistic approach that I quickly realized applied to all the arts. Everything was interconnected. Writing included.

The strongest memories of my architectural days are of time spent sketching. On the study abroad program in 1984 and later backpacking Europe in 1988, sketching became a form of meditation. I would stand in one place for several hours and work on one drawing, one space. Gradually what I was looking at became more than just bricks, stone, and mortar. I wanted to understand everything about it. What was planned and what had grown organically? Who built the space and why? How did people interact with the environment; how did they change the space, and how did the space change them? Sometimes after dissecting a building’s architectural order, I swear I felt a direct connection to the mind of its long-dead builder. It didn’t happen often, but when it did it was a revelation, to perhaps feel for just a few seconds exactly how Palladio might have felt. I imagine classical musicians have the same sensation once they have dissected their favorite composer.

Writing shares so much of all this. The constant inquiry, approaching a problem from multiple angles, the desire to get inside another person’s mind and to sense the passage of time. It’s a serious endeavor. But I don’t shy away from injecting some humor in my work – to avoid humor is to avoid reality. So I retain Professor Ferrari’s proclamation, but slightly modified. There is some giggling in writing, but not much.

Describe your writing habits.
How I write today has changed drastically from where I started. The first draft of my novel, after a few false starts, was written in a six-month fury, or at least it was a fury for me. The rule was 500 words per night, five nights a week . . . any five, so if the juice wasn’t there I could take an evening off. This discipline was tossed when my twins were born. Given the three-hour feedings x2 and a full-time job, there was little energy left for my night owl tendencies, so I began writing longhand in a notebook during any break in the day I could steal. I’ve since become intimate with every coffee shop in the DC area. Longhand has proven more difficult—the short bursts of time don’t allow for the immersion I crave, plus I end up writing multiple versions of the same sentence or scene, leaving me with too much raw material to decipher. I intend on reverting back to my evening sessions, but it’s comforting to know that either way works. As in architecture, there are many processes to explore. Whatever it takes to get the work done.
Posted by The Story Prize at 9:24 AM