In the 27th in a series of posts on 2017 books entered for The Story Prize, Josh Barkan, author of Mexico (Hogarth), discusses how instinct and curiosity lead him to write his stories. 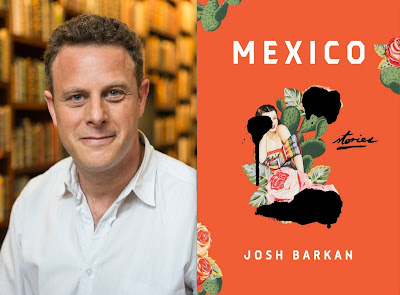 Where does a story begin for you?
Starting a story is following an instinct, a curiosity, a small fact or small oddity that I want to know more about. A large unexploded bomb, weighing thousands of pounds, was found in the city of Niigata in 1992, one of the largest conventional bombs ever discovered, forty years after World War II. What was it doing there? Why did the Americans drop it? What if there were a Japanese intelligence officer during the war who discovered not only one bomb like this, but a series of bombs like this, dropped around Niigata, Hiroshima, Nagasaki and Kyoto? What if he suspected these were signs of something bigger to come, yet not knowing what that bigger could be? What if he had a superior officer who would not let this young intelligence officer report that information to headquarters in Tokyo? Would the intelligence officer have the courage to act upon his convictions and suspicions? This was the path of the novella in my first collection of stories, Before Hiroshima, but I didn’t think about these larger themes of paralysis, and the authority of a superior officer, first. What I thought about was a two-inch news item I had found in the Yomiuri Shimbun, while visiting Niigata, about an unexploded bomb.

And what about the rumors I would hear, while living in Mexico City, that the narco El Chapo Guzmán once came into a fancy restaurant to have a meal?—even while there was a multi-million dollar bounty on his head. Why would he do that? Why were there rumors about him having done the same in his home state of Sinaloa? What if, based on these rumors, I imagined him coming into a fancy restaurant in Mexico City and my protagonist was an American chef who had to please the famous narco? What if El Chapo demanded the chef cook him a perfect meal? What if the chef realizes the only thing that will satisfy the narco is human blood? So he takes his own blood and the blood of a young girl in the restaurant and serves it to El Chapo, with the blood steeped into the fine shavings of Wagyu beef.

I remember when I came to Mexico City, to the neighborhood of Polanco, the oddity of finding a large Jewish community with men dressed in black, Orthodox, Hasidic clothing walking to temple on Friday. I am Jewish and I had never known there was a large community of Jews in Mexico. What if a teacher coming from the United States is a secular Jew and he teaches in a high school, where the children of two narcos in his class must be separated because they are children from rival narco families, children who have fallen in love? What if the teacher has fallen in love with an Orthodox Jewish woman in Mexico City and her Orthodox father does not want her to marry a secular Jew and he tries to keep them apart at their wedding? What if the teacher—because his father-in-law will not accept his wedding to the Orthodox daughter—feels empathy for these two narco children in love and tries to protect them, at personal risk to his own life? How is this like Romeo and Juliet?

So I begin stories with oddities, with things that are unexpected, with a small detail that can then grow into questions and conflicts that I need to find out how the characters will resolve them. This is one of the things I admire about the short-story writers I like. There is a quirkiness to their writing. Raymond Carver’s protagonist in “Cathedral” ends the story on his knees, drawing with his hands in tandem with a man who is blind, to feel what it is like to “see.” Every single story by Carver is strange. John Cheever’s protagonist in “The Country Husband” is eating dinner in the suburbs of New York City, one night, and he sees a maid who was once a Nazi collaborator, who was stripped naked by the villagers of a town in Normandy, as she was forced to atone for her collaboration. The last image of the story is a cat dressed in doll’s clothing. Odd things, which feel real, and have moral significance. I look for the strangeness that will illuminate our normalcy, which will get to the center of our common pain and elate me.
Posted by The Story Prize at 9:06 AM