Susan Tepper Keeps At It

In the 29th in a series of posts on 2017 books entered for The Story Prize, Susan Tepper, author of Monte Carlo Days & Nights (Rain Mountain Press), discusses what propelled her into writing. 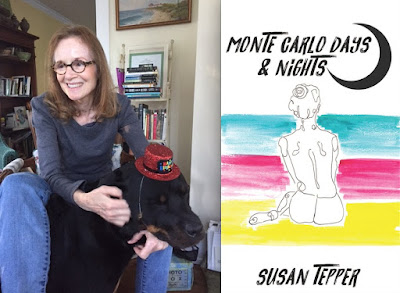 Writers usually have some inkling, I believe, that they will be doing this work. I never had an inkling. My dream from childhood was to become an actress, and so I left Long Island for the city when I was seventeen to attend drama school. Looking back on it all, I think it was the reading of so many plays that cemented language into my brain.

When acting with its limited rewards finally exhausted me, and I had moved out of the city, and was in my yard pulling weeds, with not the slightest clue of what I’d do next with my life, I began to get a message in my mind: Write that story. It pounded me all summer long.

Finally, sometime that August I sat down and cranked out a very long story. Mostly autobiographical with some juicy fake details. Then I took it to the New School where it was massacred in the workshop. Since I’d been banging around New York and other cities for years as an actor, rejection didn’t mean a whole lot to me. It sort of bounced off. They didn’t like my story. Oh, well. Except – except I happened to luck upon a great writing teacher in that first workshop, Alexander Neubauer. And when he returned his photocopy of my story, he’d written wonderful notes and at the bottom he put: Keep Writing. He underlined those two words a bunch of times. Wow! That’s what went through my mind: Wow, I can do this! It was revolutionary.

From that point forward I was seemingly jet-propelled by an unstoppable force. I went on to take workshops with Darcey Steinke, Jeanne McCulloch, Jamie Cat Callan, and another male instructor who will remain, due to his obnoxious verbal behavior, anonymous. But even he gave me something important to take away. I was a sponge. As playwright G.B. Shaw wrote in his play Overruled: “I soak up dirty water as well as clean.” Because that is the essential role of the creative writer. To construct worlds around what is soaked up during living.

My mother, who was a poet, humor writer, and essayist, had a lengthy non-fiction piece published in The New York Times opinion page when she was seventy. She had no journalism background, she was a sporadic writer, did it when she felt like it, with no career aspirations. It proved the point that good writing will rise to the top. She tossed great books my way. Somehow, she knew what I didn’t know about how my life was going to play out. Sadly, my mother died just a few weeks ago, and that shared path feels lonely now. She must have sensed she was near death, because she kept asking me when my new book would be coming out. Thankfully, she had seen the cover artwork in advance, so she saw something of this book. That gives me consolation.

Being a writer is so much fun, it’s the most fun I’ve ever had, and it’s what I most enjoy doing every day. I love talking with other writers about craft and life and love and disappointments. Recently I started an author/book Interview Series "Live From the Algonquin" to bring back some of that bygone writer glam. The Algonquin lobby is so elegant, and we order Prosecco, and for those few hours, it feels like we’ve stepped back in precious time.
Posted by The Story Prize at 10:13 AM