Michelle Ross Asks: Is a Story Ever Finished?

In the 35th in a series of posts on 2017 books entered for The Story Prize, Michelle Ross, author of There's So Much They Haven't Told You (Moon City Press), contemplates the array of choices writing a story presents. 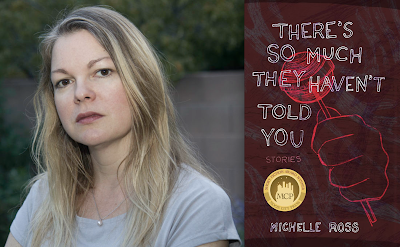 By nature, I’m an indecisive person. If I don’t bring leftovers to work with me in the morning, then I will deliberate for so long about what to get for lunch, that in the time I wasted trying to decide where to go, I could have been out and back and eating already.

Writing, of course, is an exercise in making choices. Every word is a choice. Every detail. Every action. In the process of writing any story, I make thousands of choices along the way.

I’m also a perfectionist, and I suspect this largely explains the indecisiveness. Maybe perfection exists on a small scale. There are perfect sentences, I think. But on a larger scale, perfection either doesn’t exist or, at the very least, I don’t think it’s a reasonable goal. That’s in part because while some writing choices feel easy and natural, as though I couldn’t have chosen any other way, many other choices involve more chance than that. I could have chosen differently and still ended up with a great story. Maybe it would have been a slightly different version of the story I wrote. Maybe it would have been a drastically different version of the story I wrote. Maybe so different, anyone else wouldn’t know the two stories had started with the same seed.

So I remind myself that there isn’t one correct path I must stumble my way onto or else the story is doomed. There are many fine paths I could take, so I just need to relax, make a choice and another and another and keep going.

And then there’s the revision, of course, and so reconsidering choices, and choosing differently, which creates more and more choices to make.

Until, finally, the story is finished.

But many times an editor who has accepted one of my stories for publication has requested edits. Was the story not finished when I sent it out?

When I put stories together to make this collection, I revisited work I’d published in journals a decade earlier in some cases. I found more edits to make—most of them copyedits, but also more significant edits. I cut whole paragraphs. I rearranged scenes. Were the stories not finished when they were published in journals?

My book has been a finished thing since February of this year. If ever my stories are truly finished, surely it is when they appear collected in a book that has my name on the spine, right?

Recently, an editor expressed interest in republishing a story from my book, only she wanted to know if I’d be willing to consider making some edits. In addition to being in my book, this story won a contest years earlier. A prize of $1,000, the most I’ve ever been paid for a story. I’ll admit I felt a little uncomfortable at first about editing this story now. Because to make changes seemed to be an admission that the version of the story in the book is less than perfect. But didn’t I know that already?

There’s that famous sentiment I’m not sure whom to credit: Art is never finished, only abandoned. The word “abandoned” feels a little harsh, but if by “finished,” we mean “perfect,” I’m inclined to agree that no story—or few stories anyway—are ever truly finished.

There’s something liberating and beautiful about that.

And so, yeah, I listened to this editor’s insightful suggestions, and I edited the story. And it’s a better story.

But it’s still not perfect.
Posted by The Story Prize at 8:00 PM