Adam Schuitema: How a Collection Can Be Greater Than the Sum of Its Stories

In the 29th in a series of posts on 2010 short story collections entered for The Story Prize, Adam Schuitema, author of Freshwater Boys (Delphinium Books), discusses the thinking behind the order of the stories in his collection. 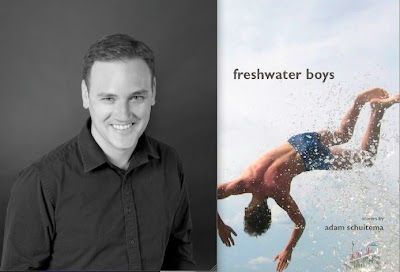 Over the course of my tour in support of my book, Freshwater Boys, a number of readers have come to me with a kind of confession. They approach after the reading or raise their hands during a Q&A and admit—with a kind of wince and a shrug—that they rarely read story collections. This often leads to a discussion about what a book of stories can accomplish, and how it differs from Big Brother Novel.

I don’t mean anthologies. And I don’t mean the “collected works” or “selected stories” of a particular author. I’m speaking about a group of stories that a single writer composed and assembled within a relatively defined time period. That period may span several years, as it did with my book. But in reading that work, a person experiences a kind of time capsule, discovering the themes and images and ideas that consumed the writer while he or she created it.

While reading through Freshwater Boys again, I notice several motifs reappearing among the stories: childhood, masculinity, lives cut short, courage, ritual, and nature (particularly the landscapes around Lake Michigan). Some of these I was aware of at the time of the writing. Others came into sight after I’d arranged the individual stories and set them alongside each other.

I sometimes compare the experience of story collections to that of a painter who exhibits all of her recent works in a gallery. The individual paintings can bring satisfaction by themselves. But when they're hung alongside each other, we begin to appreciate the reappearance of certain colors and images and ideas. Each painting generates greater energy due to its proximity to the others.

To borrow an analogy from yet another art form: Many of us today download individual songs for our iPods. Yet we lose the artistry of the album: the decisions made by musicians regarding which song to begin with and which song to end with and how to organize them all so that the experience of listening—from beginning to end—brings greater satisfaction than listening to the songs individually. As short fiction writers, we can create these same dynamics through the arrangement of our stories. I’ve always admired the way other story writers, including my mentor, Stuart Dybek, crafted their books with this same thought in mind, so I tried to be just as deliberate with Freshwater Boys.

Many of the stories are “coming-of-age narratives,” and so the book begins with three stories with boys as protagonists. As the book advances, so do the ages of the protagonists. Yet even these grown men continue to grapple with the same issues that the boys do—issues they’d expected to master by this point in their lives: responsibility, maturity, fear, doubt, and loneliness. One story, “Debts and Debtors,” features a boy getting a glimpse of his father’s adult world, and because of that I arranged it within the collection where it would serve as a kind of bridge between the youthful perspectives and the more mature ones.

Arrangement is important in other ways. In some cases, two stories were placed side-by-side because they dealt with similar subject matter, so the imagery of one naturally bled into the narrative of the next. For example, “Camouflage Fall” deals with a hunting tragedy. It’s followed by a story involving four deer running through the middle of a city.

To follow up on the album analogy, I paid particular attention to how the collection would begin and how it would end. I knew that the title story, “Freshwater Boys,” would serve as the final story in the book. In its closing scene, a man is baptized in Lake Michigan. The piece is the longest and—despite its tragedies—ends with the hope and redemption that I felt was important as a closing, resonant note.

To serve as a kind of “bookend” for this, I chose “New Era, Michigan” as the opening of the collection. Like “Freshwater Boys,” it closes with a kind of sacrament—a boy burning a dead man’s artistic creations and spreading the ashes in the lake. Thus, the book’s structure (I hope) has the circular feel of the life cycles described throughout the narratives.

And who knows? Maybe a reader will notice these things. Maybe not. But with any luck—on a subconscious level, at least—these decisions will make the reading experience, ultimately, more satisfying.
Posted by The Story Prize at 5:58 AM