Tiphanie Yanique: "A Reader Is Always a Child"

In the 32nd in a series of posts on 2010 short story collections entered for The Story Prize, Tiphanie Yanique, author of How to Escape from a Leper Colony (Graywolf Press), contemplates the divide between craft and inspiration. 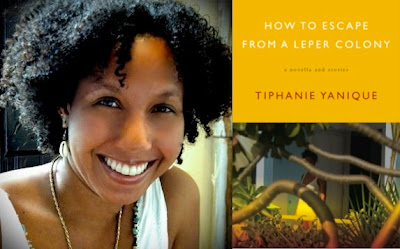 It is said that a writer must be smart but not too clever; artful but not too artsy, thoughtful but not too conscious. But wouldn’t it be a wonder to see Baraka and Ashberry sit beside each other on the last train out of or into a riotous city? Is it too much a dream to consider Akhmatova sharing a piece of her people’s bread with Oliver, and Mary in turn passing Anna a lily? It is said that to write well, one must not write with political intent or social hope. But this impossibility is always what I have strived for in my own person. To be someone both artful and socially intentional.

Once upon at time craft and inspiration were good friends, lovers actually. They were ravenous lovers, co-dependent, even. Thus, were born books such as Dubliners, stories such as "Sonny’s Blues." The people all had a calling and it was called inspiration. I might also call it intention, hope, consciousness, love, hate, horniness. I mean to say that all people live inside their particular desires.

It has come to pass that some people live inside a life where they do indeed get arrested for breaking into their own castles or cabins. This might be inspiring for them to write about. Others may watch such a mess (or message, depending on if the others are participant observers or voyeurs) on TV and consider it rather fetching material for a story. Material is not the same, in this account, as inspiration. Inspiration, to be elementary, comes from inside, where the gods (or you may call them muses) reside. Material comes from without.

The time came when craft and inspiration would never again be friends. I began to see the splinter when I read stories with social awareness that were terribly written and when I began to read fiction that was skimpy on worldliness but finely crafted. The rift began when we were all children. We were told that we must be readers who value the mind or readers who value the emotion. We were taught that the very good literature took a certain mind to be appreciated, whereas the bad stuff, well, that was for babies. We did not understand this. When we read Silverstein’s The Giving Tree, we were disturbed by it, in love with. It was poetry and it was prose. We did not care. It made us want to cut down our parents. It made us want to love and never leave them. It made us want to read it again. This lasted until we were asked to pass a test, enter a contest, sell our books on shelves. Then we understood that craft and inspiration were supposed to be unfriendly toward each other. At least they should act that way. At least they should pretend.

This made all us children, who by instinct, love a good story, very sad. In his essay, “Imminence: Reflections on ‘the-about-to-be moment’ in the Comedies and Tragedies of Being Human,” Kevin McIlvoy says, “A reader is always a child, and that child is always making a wish.” The wish I had was for cool stuff to happen in what I read and wrote and for it to make me or other people feel cool and do cool stuff. Like laugh, march in the streets, curse somebody out, close the door and meditate. Those things were cool to me. But it mattered not, for the narrative went like this: The literature teachers favored stories that were obviously socially and personally aware, the creative writing teachers favored stories that were obviously crafted. And that was to be the end of it.

But it was not the end. Because people kept living lives that were socially meaningful or personally profound and they couldn’t help, if they were writers, but write about it, and they couldn’t help, if they were readers, but read about it. In my tales I have sought to write about what truly matters to me. My stories are each vastly different and are told each in a particular way via a unique voice—which must mean that my true self is schizophrenic. All those voices came out of my insides. I wanted to write about what matters and in such a way that mattered. But this must be, clearly, what matters to the child I was and still often am. It is about what inspires, you understand, me.

And so it came to pass that I wrote a story about failed nuptials that teach two families how to love. And I wrote a story about a man who catches a culturally specific disease that causes him an inconvenient paralysis. And I wrote a story about an abandoned daughter who finds relief from her pain only when having sex or dancing in a carnival parade. It was said that I cared about familial and romantic love, that I cared about colonialism and racism, that I cared about the abandonment of children and the sexual freedom of women. And it was true. But I care about them not only in my writing. I care about them first in my life. These things mattered to me as a child and they matter to the child within me and these matters are the truth and the fiction of who I am in the adult world of life and literature today. But I was not, you see, in New York when the towers fell. No one I know died. It did not, it is true, personally affect me. It might have served as material but never as inspiration. And so while I will bow my head for those dead, I will not write about them.

Ever after it will be that writers who feel they should write about war but do not really, not really, really, concern themselves much with war in their lives, are bound to write poorly. They are best off taking one of two dusty roads: writing what truly matters to them or putting aside the writing to go live inside the hopes from which they wished to be inspired. And of course the second road leads to the first and the story never ends. And we are happy for that.
Posted by The Story Prize at 7:58 AM