In the 22nd in a series of posts on 2010 short story collections entered for The Story Prize, Stella Pope Duarte, author of Women Who Live in Coffee Shops (Arte Público Press), talks about how she works. 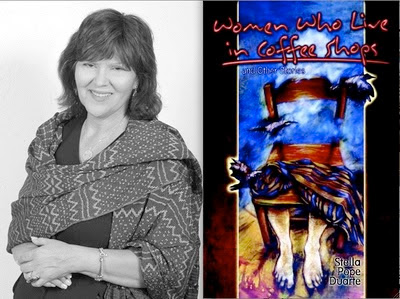 Describe one of the stories in your collection.
The first story of my collection, "Benny," is told through the eyes of Maria, an eight-year old girl who lives with her mother along Van Buren Street in a run-down apartment in the projects. She has never seen her father, and discovers that his name is Benny, just like one of the heroin addicts who populates the rough, inner-city neighborhood. Her mother is adamant that Maria does not need to know her father, and she is possessive and controlling.
While playing with friends in an empty warehouse one day, Maria meets her father. He helps her climb out of a broken window and greets her by name, which surprises her. He kneels at his daughter's side and asks her to place her hand flush with the palm of his hand. Then he says "Another piano player..." She realizes their hands look the same, except her fingers were smaller and neater. And she notices he has no shoelaces.
Later, her mother confronts Maria for playing in empty warehouses, and she is angry that she spoke to her father, whom she tells Maria is a hopeless drug addict. In a conversation with Mom at bedtime, Maria discovers that her mother still loves him...the Benny she never knew who happens to be her dad. She tells her mother she'd like to get him shoelaces as he has none, but her mother tells her she doesn't know where to find him. The story ends with a surprise gift, a piano, "kind-a beat up" but "tuned to perfection" is delivered to their apartment. Maria's mom has to tear down the front door of the apartment so the piano can be moved in. When Maria wins her first blue ribbon in competition, she nails a pair of shoe laces next to her prize…in anticipation of someday seeing her father again.
What is your writing process like?
My writing process is pretty much out of my control. My whole writing life started by way of a prophetic dream in 1995, in which my father related to me by way of a "spiral staircase" that I was to write. Stories may begin as an isolated image, or a sense of something, a movement or an energy I can't describe. At times, the character's name will surface, and the story will begin, often so vividly I can see it like a movie in my head. The story energizes me and begins to emerge, often with great urgency. Of course, there are many drafts, and revisions, as the story takes form—and many surprises, laughs, and tears along the way.
What kind of research do you do?
For my novels I do extensive research, often several years before the novel is complete. For my short stories I do brainstorms, in which I seek to discover the hidden memories, longings, and conflicts that my characters will face. Who are they? How do the stories fit together? Where are the characters leading me? If my own memories get involved, I visit places where visual clues can come alive, and help me understand the characters and the places they inhabit. The best thing I can do for short stories is to STAY OUT OF THEIR WAY.
What inspires you?
I love art in all its forms and often will get an idea from paintings, sculptures, or photographs—or by just watching people in action. At an intersection, for instance, watching people at a stop sign, I can make up an instant scenario for who they are and where they are going.
Posted by The Story Prize at 11:47 AM