In the 26th in a series of posts on 2010 short story collections entered for The Story Prize, Morris Smith, author of Above Ground: Cemetery Stories (Snake Nation Press), talks about her lugubrious theme. 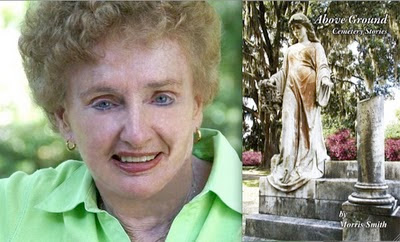 Why did I write stories set in cemeteries? This collection simply happened. About ten years ago, I realized that I had already written three stories, all set in cemeteries or nearby, without a collection in mind. The first of these, "Son of Fire," had been based on an intriguing account in a local newspaper of an event mostly in a funeral home. The story was a success and published in a Canadian literary magazine. The next story, "Formica," written several years later, was based on a bizarre happening in a cemetery in a neighboring tow, told to me by a friend. The third story, "Elysian Fields," was written because of a personal experience.
In about 2001, I decided to add more stories set in cemeteries and consider it a collection. I asked friends if they knew of odd or interesting occurrences at funerals, or just in cemeteries, not necessarily at a funeral. A good number did!  I think most people, if they think back, have some "cemetery story" to tell.
So over the next several years I wrote ten or eleven more stories; two of these were inspired by newspaper accounts, which I added to. "Instant Resurrection" was one. Two stories were written to feature a special location, places I particularly liked: "Boothill," in , , was one, and "Cypress Grove," in a cemetery was another.


At least one of the stories came straight out of my head:"Talking to the Dead." In all the others, at least part of the story came from one of the tales I'd been told, then I created characters and added to them. These stories were fun to write. I liked mixing humor into the stories set in cemeteries.
Posted by The Story Prize at 9:58 AM