Christian TeBordo and the Exploding Story

In the 37th in a series of posts on 2010 short story collections entered for The Story Prize, poet, novelist and short story writer Christian TeBordo, author of The Awful Possibilities (Featherproof Books), discusses how he works and what he looks for in a story collection, among other topics. 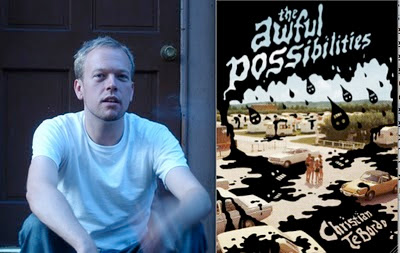 What is your writing process like?
I don't really have a writing process. Usually I write by hand with whatever paper is available, but I'll use a computer if the sentences need to be fast or if I'm on a deadline. Time-wise I write when I get the chance, or I'll make time if I feel like a story's about to explode. Sometimes I think it would be a good thing to get a process, but I just can't see myself as the write everyday type. First because (and I know this isn't true for everyone, just me) I think there's an inverse relationship between quantity and quality; second because I don't think the world needs every idea I have, only the best of them. Of course, I can barely go five minutes without thinking about writing.

What do you think a good short story collection should deliver?
I like collections where the stories seem like they're at war with one another. Maybe there's an alliance between any group of two or three, but generally I like having no idea what I'm in for when I finish one story and start the next. That way the individual pieces can play off each other dialectically, make a synthesis that adds up to an authorial (as opposed to a generic, or literary) sensibility, and hopefully paint a truthful picture of the world as it is or could be. That sounds a little idealistic, but I find a handful of books that do it each year.

What book made you want to become a writer?
I'm probably like many males of my generation in that discovering Vonnegut in high school really opened up the possibilities of fiction for me. But as for short fiction, it was Barry Hannah's Bats Out of Hell, specifically "The Vision of Esther by Clem," that really turned me on to the form. With that story, he seemed to take all of the psychology of the best nineteenth century novels and cram it into twenty or thirty pages of ecstatic prose. I know that Airships (which I also love) is technically the top candidate for classic status, but Bats Out of Hell gets my vote.

Have you ever written a short story in one sitting and not revised it later?
Am I going to get kicked out of literature if I answer yes? Well, no, if by "not revised" you mean not even proofread and tweaked some. If you mean "have you ever gotten a story right the first time," then yes. Some stories need slaving over, others just come on out. Neither will ever be perfect, but perfect's not exactly what I'm aiming for, and anyway, I doubt anyone who didn't know me well would be able to guess which ones were easy and which weren't. I have a gift for making it look difficult.
Posted by The Story Prize at 12:18 PM