Shannan Rouss on L.A. as an Adjective

In the 40th in a series of posts on 2010 short story collections entered for The Story Prize, Shannan Rouss, author of Easy for You (Simon & Schuster), discusses the part her native Los Angeles plays in her work. 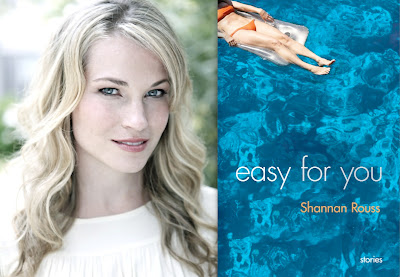 If I were to rename my book, I'd call it Natives. My family has been in L.A. since 1923 when they left Fort Worth, Texas, for reasons that aren’t entirely clear. The way my grandmother tells it, she was sick in some vague, undiagnosed way, and apparently Southern California was where you went to get better.
It’s worth mentioning that my great grandmother’s sister had married my great-grandfather’s brother, which meant that when one family decided to leave so too did the other—all of them settling in West Adams, a changing neighborhood that was fast losing its wealthiest residents to the brand new Beverly Hills.

Today, three generations later, my family is a map of urban sprawl, stretching from the far reaches of the San Fernando Valley to the edges of Orange County and eventually down into San Diego.

We are normal in the sense that no one has become an actor or a filmmaker. No one is even in the “business.” For the most part, everyone is a doctor or a teacher or a lawyer. We are from L.A. but we are not L.A.—sooo L.A., very L.A., how L.A.—the city as an adjective, a pejorative term describing anything affected, shallow or downright silly. Like Venice boardwalk’s Botox on the Beach where walk-ins are welcome, or the Craigslist ad for an apartment with “rock star views and super model décor.”

I wonder: Who are the walk-ins? The people making an appointment to see this apartment?

Of course, I know the answers. I have figured out that this L.A. exists even if it doesn’t. What I mean is that beauty and perfection and rock star views may not exist, but the dream does, both the creation/perpetuation of it and the people who will always be looking for it.

Easy for You ended up being my attempt to write about the real L.A., not the dream. But the people and stories that came to me by way of memory and imagination were always abutting the dream, pressed up against it: the widower at war with his new neighbors in Beverly Hills adjacent or the teacher on a field trip to the city’s La Brea Tar Pits.

The L.A. they inhabit is as mundane and lonely and dream-less as anywhere. The difference is that the dream is right there. Which means, in a way, that there is nowhere left to go.
Posted by The Story Prize at 5:32 AM