Judith Stephens Answers the Call of the Wild and Acts Up

In the 38th in a series of posts on 2010 short story collections entered for The Story Prize, Judith Stephens, author of Rancho Armadillo (Livingston Press), discusses the creative energy she draws from acting, among other things. 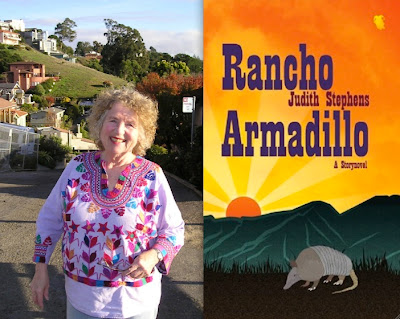 What book made you want to become a writer?
The Call of the Wild, by Jack London, penetrated my ten-year-old soul. Buck's determination to survive and his ultimate conquest of the Yukon's environment gave me hope. There in my canyon home, the only stranger in my new country school, Buck inspired me to adapt.

I had read to my little brother, and I had read all the Oz books fast, so fast that my dad decided I needed something more challenging. So, in rapid succession, he brought me The Call of the Wild, The Three Musketeers, and The Count of Monte Cristo. I read the entire contents of the fifth/sixth grade library in my school. Then I said, Mom, what do I do when I've read all the good books? My mother didn't laugh, “Maybe you'll write some good books.” I knew I would never be as good as Jack London and Alexander Dumas, but I could tell stories, and I began writing them down.

If you dabble in any other non-literary forms of expression, what do you do and how does it inform your work?
Acting. I love to perform on stage. When I write or when I act, people listen to me, which is not true when I talk. Soft voice? Maybe, although I can project my voice on stage. When I was young, people thought I had to be stupid under my blonde hair, so they didn't hear when I offered an observation or insight. And writing? I get to say what I want, but it can be a long wait for a response. When I act, I get an immediate response; I know instantly what works or doesn't.

How does acting affect my writing? The theater infuses juice into my creative energy; at the same time it does not engage the part of my brain that must wander to let my imagination free. The best stories I write are not at the surface of my mind when I sit down. I may take hours to get to them. If I act in just a few short pieces each year, the words seem to flow straight out of my fingers when I sit down to tell a story. And when I need a story to move fast, I use dialog, as in a play.

Have you had a mentor and who was it?
Herb Wilner was my mentor. I applied to enter the masters program at San Francisco State twice, and I was rejected twice. I had applied with poetry, although I wanted to write fiction. I had begun to learn to write poetry with the theory that poetry is shorter; you can write ten or twelve failed poems in a week and then analyze them to see what went wrong, whereas even one short story could take a week just to write. Some of my poems had been published, but my groups didn't offer much criticism, and a hard critical look was what I needed. When I told Herb that, he got me a special place in the masters program.

When I took his short story class, I found a teacher and a mentor. His writing was nothing like mine. As he put it one day, he was a civilized writer, and much as he loved William Faulkner, he didn't write like Faulkner. Maybe all writers are like me – I really don't know if what I write is any good, so I must rely on trusted feedback, and Herb was perfect. He was wonderful at spotting missed opportunities and generous with his comments, whether I succeeded or not. Later, when I taught at San Francisco State, I did my best to emulate him.

But he was a sick man. When the time came for my oral exams, he was in the hospital, and he died the day after I passed the orals.Years later I still miss him, but I try to look at my work the way he would have, and I have learned to be great at spotting missed opportunities (or so my fiction group tells me).
Posted by The Story Prize at 11:50 AM