Kermit Moyer on How Lies Can Get at the Truth

In the 36th in a series of posts on 2010 short story collections entered for The Story Prize, Kermit Moyer, author of The Chester Chronicles (Permanent Press), answers a few questions about his book. 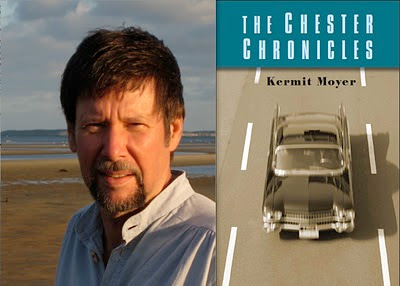 What is The Chester Chronicles About?
It’s about the childhood and adolescent experiences of one singular individual, but it’s also about the way our identities are shaped by our families and the times we live in—which is to say it’s about the interplay between self and culture. Thus, Chester is seen in a context of books and movies and popular music and attitudes toward sex and race and politics and history unfolding during the Cold War era. The themes of these stories include the loss of innocence, desire and taboo, aspiration and heartbreak, and the way the imagination constructs what we take to be reality.

Why did you write autobiographical fiction instead of a memoir?
In my view, the best way to tell the truth is to lie—that is, to write fiction. This is not only because it’s easier to tell uncomfortable truths about yourself if you’re talking about someone else but also because it’s impossible for memory alone to do justice to life’s intricate and filigreed surface, its varied textures and detailed particularity, without resorting to imaginative invention.

Like Chester, you grew up as a so-called “Army brat”—what was that like?
Growing up in the 1950s and ’60s, I was familiar with the designation, “Army brat,” but I wasn’t sure whether to feel offended or honored by it. Although “brat” is certainly a negative word, I liked to think the term implied that military kids, because they were necessarily rootless, were less tractable and more willful than other kids, more restless and harder to control. If you were an Army brat, you were only in a place temporarily, and this was something you knew going in. So you could never let yourself feel too much “at home.” You were only a visitor, an outsider, but this tended to make you an observer, too, and, out of necessity, a kind of cultural anthropologist—in short, it gave you the natural perspective of a writer.

Chester hates his given name. How did you like being named Kermit?
When I was a kid, my virtually unheard-of name (there was no Kermit the frog back then) sounded strange because we moved so often. If I’d grown up in one place, my name would have become too familiar to strike anyone as strange. Consequently, at the center of my myth of myself there has always been the fundamental belief that all the qualities that make me who I am, and especially the ones that make me a writer—my hermit-like shyness and self-conscious discomfort in social situations, my bookishness and interiority—have resulted not simply from being named Kermit, and not simply from being an Army brat either, but rather from the wicked combination of being both--an Army brat named Kermit.

What are your favorite and least favorite parts of the writing process?
My favorite parts of writing are the beginning of a story when anything seems possible and the ongoing trial-and-error process of revision. The part that scares me (because it’s mostly not under my control) is writing the first draft of a paragraph or a scene; the part I like most (because it is under my control) is revising that first draft, clarifying and polishing what’s there until it seems to shine.

What’s the best advice about writing that you ever got?
The poet William Stafford, in his book Writing the Australian Crawl, says: “A writer is not so much someone who has something to say as he is someone who has found a process that will bring about new things he would not have thought of if he had not started to say them.” My other favorite quote about writing is something E. L. Doctorow said: “Writing a book is like driving a car at night. You only see as far as your headlights go, but you can make the whole trip that way.”
Posted by The Story Prize at 5:30 AM