In the 22nd in a series of posts on 2017 books entered for The Story Prize, Zach Powers, author of Gravity Changes (BOA Editions), touches on transparency and astonishment. 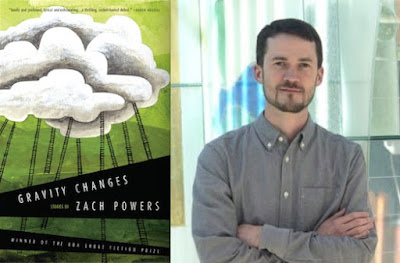 Way back when, studying saxophone as an undergrad, I encountered a strange pedagogical sentiment. One was supposed to play the instrument in a way that emulated the human voice. My immediate response was to ask: Why the hell wouldn’t I just sing, then?

I was young and shy and probably never asked my question aloud. Partly that’s because the sentiment isn’t entirely wrong. Most musicians I know would agree that their goal is to make their instruments “sing.” Western music is derived from voice, after all. But it’s been twenty years, and I’m still not sure why voice should be both the starting and the stopping point when it comes to creating a melody.

Now that I’m in the world of creative writing, I’ve encountered a similar sentiment. I hear over and over that prose should be transparent. Here again, my inner contrarian rises to the surface. Why would you spend so much time putting words on a page only with the goal of making a reader ignore them?

I once wrote: “The words are merely the invisible jet of writing meant to carry the Wonder Woman of emotional urgency to a reader.” That sentence is terrible on so many levels. If I’d written it in a manuscript, I would have deleted it even before I started writing the next sentence. But it’s also one of those things I might have cut and pasted into a Twitter post. Terrible as that sentence is, it also contains something I think worth saving. Energy, mirth, the dreaded cleverness.

I came to literary fiction by way of sci-fi, and I was first drawn to writers who carried speculative elements into their literary work. I read Haruki Murakami’s Hard-Boiled Wonderland and the End of the World in one sitting. I spent a good year writing only self-referential works inspired by Italo Calvino and Jorge Luis Borges. I discovered Aimee Bender’s “The Girl in the Flammable Skirt” in an anthology and then sought out every story she’d ever written.

Bender, in particularly, writes transparent prose. I’m constantly awed by the efficiency with which she crafts sentences, a place for every word and every word in its place. I reread one of her stories whenever I feel my own writing getting bogged down in invisible jet metaphors. But as exceptional as her prose is, it’s the more visible moments that draw me into her stories. For example:


My lover is experiencing reverse evolution. I tell no one. I don’t know how it happened, only that one day he was my lover and the next he was some kind of ape. It’s been a month and now he’s a sea turtle.

That’s the opening paragraph in Bender’s “The Rememberer.” This paragraph both pulls me out of the story and deeper into it. Initially, I’m forced to retreat into my own mind, to acknowledge the impossibility of the premise and suspend my disbelief. But once I’ve made it through that process, I’m more deeply invested in the story than I would have been otherwise. Bender uses opaqueness to get my full attention.

It doesn’t matter to me at all if a premise is “contrived” or prose “visible.” Yes, those are helpful concepts to be made aware of in a writing workshop. The tendency toward simplicity and concision should be learned and internalized.

However, emotional weight doesn’t come only from characters acting as if in a stage play. But I think that’s the implication hidden inside talks of transparency. The reader is meant to co-opt a character’s feelings or react to a character’s thoughts and actions. But I can look at a sunset and feel something without somebody else feeling it first for me. I can ponder the vastness of the universe and my own speckness and feel swallowed and boundless at the same time. I don’t need an intermediary.

I guess my point is this: Astound me. Whether it’s a poetic turn of phrase or a mind-blowing premise or an everyday scene written to perfection, I want to be astounded. Astonishment can’t be contained in a piece of writing advice. Good advice is, by its very nature, common. Great writers recognize when the uncommon is more interesting and effective.
Posted by The Story Prize at 9:30 AM