In the 24th in a series of posts on 2014 books entered for The Story Prize, Karin Lin-Greenberg, author of Faulty Predictions (University of Georgia Press), tells how a serious of unsatisfying jobs—and a stab at cartooning—led her back to writing. 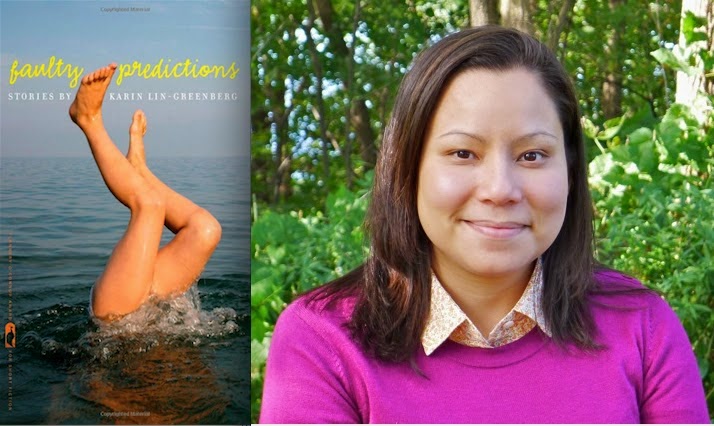 After college, I moved into my parents’ basement in New Jersey and spent hours each day searching for a job. I went on many interviews in Manhattan, mostly for jobs in publishing. I’d been an English major with a creative writing concentration, and I hoped to find a job that would utilize my reading and writing skills. I don’t remember much about these interviews except a) I didn’t get offered any jobs in publishing, and b) when asked how I liked the women’s college I’d graduated from I used the word “empowering” a lot.

After months of interviews, I was offered a job. The job ad was vague, but it asked for someone with “strong writing skills.” I went to a dark basement in Brooklyn where there were several televisions with headphones attached and a keyboard in front of each screen. The job was to write closed captioning for videos. The man running the operation said, “It’s not difficult.” The phone rang. He excused himself and gestured for me to take his seat in front of the video he’d been captioning before my arrival. There was pornography on the screen. The man finished his conversation, looked at the television, and said, “Sorry. I shouldn’t have left it running.”

“Do you caption a lot of this?” I asked.

“Yeah.” He shrugged. “There’s dialogue.” He paused then said, “Do you want the job?” He hadn’t asked any interview questions.

“No, thank you,” I said. To turn down this offer after months of unsuccessful job hunting seemed foolish, but this wasn’t really a writing job. I thought they should have advertised for “strong hearing skills.” I went home and did not tell anyone I’d turned down a job.

A few weeks later, I had another interview. I’d given up on publishing and writing jobs—and the idea of being any sort of writer—and had applied to be a counselor at a non-profit that helped low-income high school students with the college application process. The director of HR looked at my résumé and said, “We have an opening for a grant writer. You’d be a good fit because of your English major.” She described the position, but I wasn’t listening. All I heard was the word “writer,” and the fact that I wouldn’t be transcribing dialogue in pornographic movies was enough for me to accept the job offer. I would soon learn the job was more about fundraising than writing. 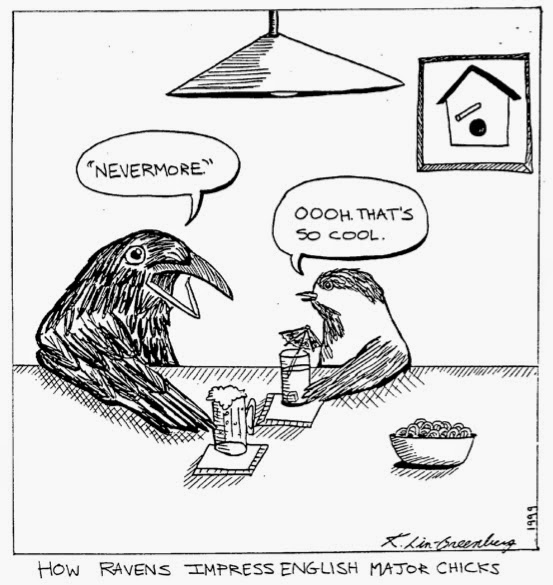 On my first day of work, the Director of Development announced she was quitting. The Assistant Director of Development, who was left to train me, decided she’d rather spend time jogging and shopping. Each morning she changed into running gear, left, and returned hours later sweaty, toting shopping bags. The only other person in the office, the secretary, complained incessantly. One afternoon, she opened a window and flung a box of addressed, stamped envelopes—with pleas for donations inside—into the garden two stories below. I spent hours outside collecting envelopes. The secretary learned that our health insurance covered therapy, so a few afternoons a week, she went to therapy, which she said she needed because of the job. Often, I was alone in the office, and I could hear the counselors—the job I’d initially applied for—laughing with high schoolers down the hall. I was only a few months out of college, and already the working world felt dismal.

I wanted to be doing something else, something creative and fulfilling. In high school and college I’d drawn cartoons for the school newspapers. I’d never harbored serious thoughts about doing it for a living, but desperate for an escape, I spent much of my time in the Development Office researching how to be a professional cartoonist. At work, I fiddled with a letter addressed to potential donors, but my mind was on cartoon ideas. At home at night I drew. I knew becoming a syndicated cartoonist was a long shot, but the fantasy kept me going in those months. 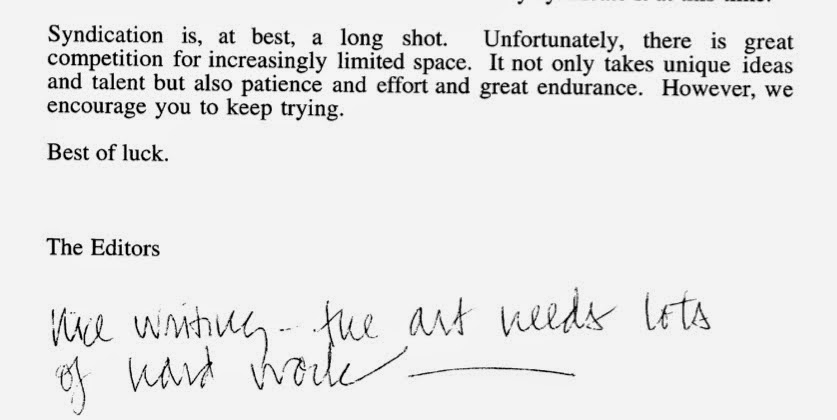 I learned how to prepare my work for submission, and I sent my cartoons to the major syndicates. Soon, the rejections came in. One day a rejection arrived with a handwritten note on it: “Nice writing—the art needs a lot of hard work.” Nice writing, I kept thinking. I told myself that maybe this note was a sign, a message. I put too much stock in that scribbled note, but I was twenty-two, confused about what I should be doing with my life, and maybe I just needed a push to pursue writing seriously. Plus, was it any more ridiculous to want to be a fiction writer than a syndicated cartoonist? The odds, once I started looking into it, seemed fairly similar, just as slim.

Soon after I got that note, I quit the grant writing job, found a more gratifying job teaching adult basic education, registered for continuing education writing classes, and started studying for the GREs. The next fall, I applied to graduate school for writing. Maybe I’d be a cartoonist today if I hadn’t gotten that note about my writing, but I doubt it. I think I would have found my way back to writing eventually.
Posted by The Story Prize at 6:54 AM