In the 25th in a series of posts on 2014 books entered for The Story Prize, Kathy Page, author of Paradise & Elsewhere (Biblioasis), discusses how travel has informed her writing. 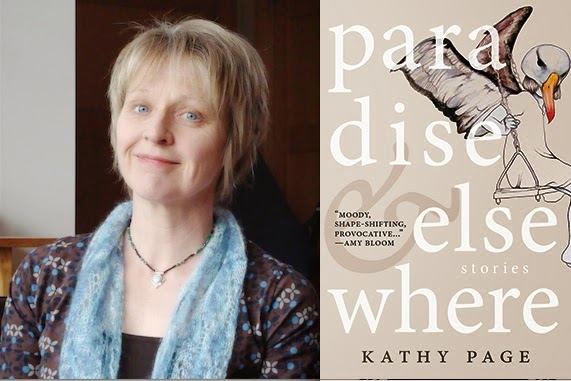 What else (beyond books and writing) informs or inspires your work?
Leaving home: I put it this way because citing “travel” as an influence  might suggest a Chatwinesque writer who has traversed vast countries on foot, lived with Amazon peoples, or sailed to Tahiti. Far from it: for a twenty-first century, first-world person, I’m less travelled than most, and none of my journeys have been exotic or intrepid.  Even so, the relatively few places I have visited—and the relationships and states of mind that  travelling involves—have had a profound effect on my work. The influence shows most clearly in the stories collected in Paradise & Elsewhere, a book populated with travellers of various kinds and also with communities responding to the arrival of strangers.

When I set out, my feelings are ambivalent. I want to see the world but also find it very hard to leave home. At a rough count, I’ve had about six homes. I stay in the same area for years, decades at a time, wrenching myself away when it finally becomes necessary for one practical reason or another. Fourteen years ago, I emigrated from London, England, to Salt Spring Island in British Columbia, and although I’m happy here, I’m also still recovering from the move. Wherever I live, I set up a home office and spend a great deal of time in my locality walking, observing, absorbing the place. I become familiar with the people and the animals, the weather patterns and soundscapes.  I plant a garden and see what grows. My attachment to where I live is one reason why encountering other places, even within my own country, has such a powerful impact. I think of them as someone else’s home.

Particularly acute and wonderful is that first encounter with a new place, both people and land: the way someone else’s everyday can be so vivid and particular, and a simple thing such as catching a pike, preparing it for supper and eating it towards midnight, the sun still just shy of the horizon, can feel utterly transcendent. Over and over again, travel proves how nothing need be exactly the way it is, that history is both a work in progress and an argument, that change is constant, and anything is possible… Once I am on the road, each place (with notable exceptions) is hard to leave. I want another day, week, or month. I want to know what it is like to live where I am merely visiting.

That fish supper on a rocky island in the Gulf of Bothnia was a simple thing. I was an invited guest: one first-world, European person holidaying with another, a colleague becoming a friend, and her extended family. It was a stage in a relationship that developed over several years. We were on relatively equal footing. The Finns spoke English fluently; I had only a few words of their language, but since Finnish is known to be fiendishly difficult, mastering it for a brief visit would not be a reasonable expectation. My hosts were as free to travel as I was; our cultural differences were mutually interesting. One of the things a traveller does is make and tell stories, and later, I celebrated that day in an essay called “The Pike’s Heart.”

Yet often it’s more complicated. A glance at the history of exploration and trade serves as a reminder of the darker sides to travel. Paradise & Elsewhere opens with a pair of tourists who fail to understand the nature of their economic relationship with the community they’re passing through. In other stories, travellers strike bargains, are treated to elaborate and contradictory accounts of the meaning of  archaeological sites, are taken in, expelled, turned to stone and (in a separate story) stoned to death; in one case, a woman welcomed and bedded by her host later finds herself kept prisoner, though she does finally escape.

Travel frequently involves us in multiple imbalances of power, and confronts both traveller and hosts with choices as to how to  deal with a person who seems in some way distinct from them. Ordinary life does this, too, of course, but travel brings these tensions to the foreground. The arrival of the stranger at the gate or on the shore is the end of one journey and the beginning of another. It’s the encounter between self and other, the place where we fight, negotiate, or fall in love, and discover how doing so will change us. It’s the place where stories begin.
Posted by The Story Prize at 8:48 AM