In the 27th in a series of posts on 2014 books entered for The Story Prize, Kathleen Winter, author of The Freedom in American Songs (Biblioasis), discusses her alternative existence and her worst/best story idea. 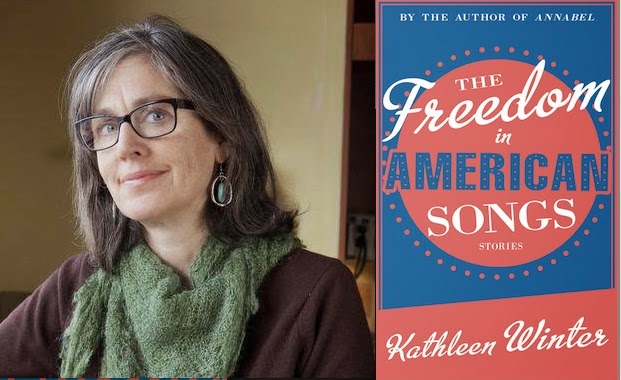 If you weren't a writer, what would you be doing?
I would be a street sweeper. Not with a machine, but with a broom and dustpan. I'd teach myself the Zen of sweeping leaves, dust, cigarette butts and the bits of foil from gum and chocolate bars into a nice, heavy shovel. I'd listen to all the sounds: conversations of passers-by, traffic, yelping dogs tied to lamp posts. When it rained I'd lean under a tea shop awning and smoke a cigarette while the drainpipes and gutters spilled over onto the shiny pavement.

Describe an unusual writing habit of yours.
I wear a red Superperson cape.

Do you ever borrow characters or situations from real life, and has anyone ever confronted you about it, been angry or pleased?
A man once followed me off a bus with my book in his hand, ranting at me that I'd used his mother in my story about a woman who gets stuck in some Florida mangroves. He unwrapped a three-foot long section of actual mangrove root from a roll of newspaper under his arm and started thrashing me with it. Luckily a couple of cadets from the Quebec police force took him away.

What's the worst idea for a story you've every had?
I wrote a story (about a fat boy) so scary I had to burn it and get a witch friend to do incantations over the ashes.

What's the best story idea you've had that you've never been able to write to your satisfaction?
I think maybe the fat boy story.

What do you do when you're stuck or have "writer's block"?
I go to the Y and sit in the sauna with all the naked women from Chinatown slapping themselves energetically with paper towels and yelling at the top of their lungs.

What advice do you have for aspiring writers?
Get the edition of Strunk and White's Elements of Style illustrated by Maira Kalman and eat it.

What else (beyond books and writing) informs or inspires your work?
Railyards and vetch and iron bridges and flattened grass where animals have slept.
Posted by The Story Prize at 7:07 AM