In the 29th in a series of posts on 2014 books entered for The Story Prize, Kyle Minor, author of Praying Drunk (Sarabande Books), lays out an elaborate fantasy that he couldn't work out as a story. 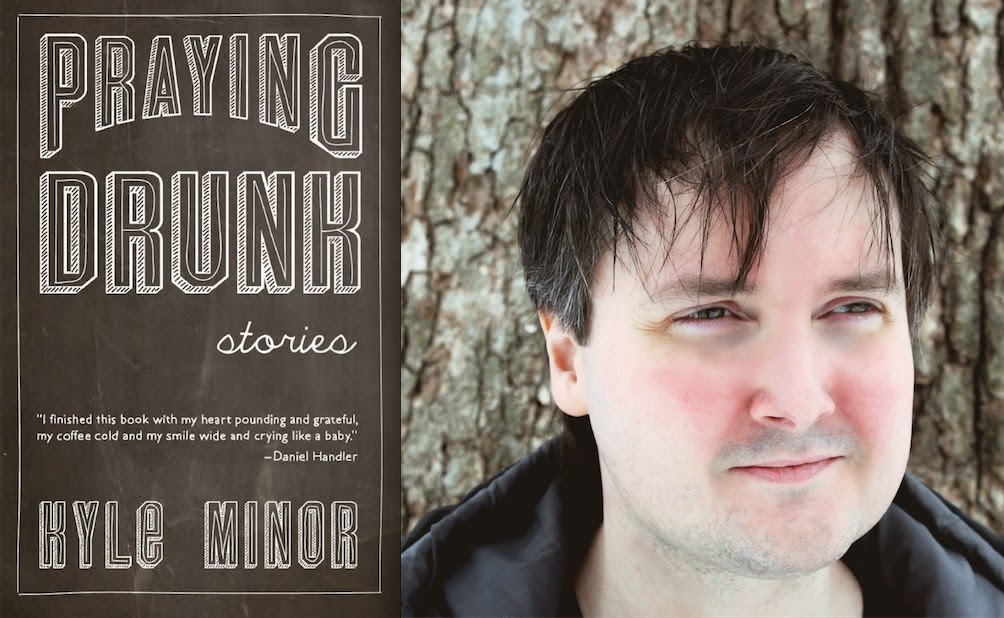 What's the worst idea for a story you've ever had?
I had a recurring and embarassingly self-centered fantasy about a special kind of time machine that would allow me to place the sum total of my by-adulthood life experience, knowledge, memory, muscle memory, and consciousness into my baby brain in the year 1976, not long after birth.

In this fantasy, I didn't have any noble aims. I didn't mean to use my future knowledge to bring about world peace or ward off disaster or alert people to soon-arriving trouble (with one exception, about which more in a minute), on the theory that people are going to be self-destructive one way or another, and, besides, most of us know that the thing we're about to do is going to undo us, but we do it anyway, because we want to do it, consequences be damned.

For about two years I tried to write a story out of this awful time machine idea. I developed very specific plans, most of them involving the entertainment industry, which I'd reach good and early by practicing the piano and the violin every waking hour as soon as I was big enough to pick up either. Around age four, I'd set up a concert, call all the television stations in Palm Beach County, beg them for their tapes afterwards, send the tapes to the Johnny Carson show, try to get booked the same night as John Lennon. Timing would be imperative, because I'd mean not only to get Lennon's attention, but also to avert his death.

And, here's the thing: I'd know all these great songs, and it wouldn't be plagiarism, would it, to write songs that would otherwise exist in the future but which in present time hadn't yet been written?

In the Green Room at The Tonight Show, John Lennon would stop by to see the curiosity, the freak show, maybe be kind to the child in person but have a perverse laugh later at my expense. But when he got in there, I'd say: "Wait a minute. Listen to my song. Then I'd hit him with something great, then another, then another. Then he'd say, let's go on together, you and me. Let's do these songs."

Johnny would wave us over to his chair. He'd ask how long we'd been playing together, and Lennon would say about two hours, but isn't this the beginning of something good? This is like a thing I remember a long time ago in Liverpool, with a kid named Paul.

We'd start writing together, after that. He'd sign me to his publishing company, and set me up with my parents in an apartment in Manhattan. At some point in early December I'd throw a temper-tantrum, demand we immediately fly to Paris and record, explain this urgency was the central thing in my life, tell him I was dying, whatever it might take to get him out of New York before December 8, get him away from the Dakota Hotel and the evil that lurked just outside.

You can imagine the rest. First the songs, then the records, then TV, movies, a life of making things not terribly different in kind from the life I have now, but very different in terms of access and means and scope and duration. Instead of spending my childhood at the fundamentalist Christian school that was founded in large part to keep the white kids away from the black kids, and instead of spending my weekends at the Southern Baptist Church where the traveling preachers played Beatles records backwards and suggested they be burned, and instead of spending my nights staring out the window at the sky, hoping it wouldn't turn red, that Christ wouldn't return with the sword, command the graves be ripped open, leave so many of us behind to face the reign of terror by the eastern European Anti-Christ, while the U.N. helicopters chased us over the mountains as we fled the guillotine—a thing I'd seen more than once in movies projected in 16mm on New Year's Eve in the church Fellowship Hall, while sitting at tables filled with turkey stuffing and homemade banana pudding . . . Instead of all that, I'd spend my childhood fighting to complicate those stories, and making music, and learning to draw and animate and fill up real life with an imaginary and hyper-real version of life I could create and invent with all my waking hours and days and weeks and months and years, and generally throwing up my middle finger at the specter of death, even though, then as now, it would have been coming, it would have been everywhere.

It was my mother, a person who had never before encouraged me to write anything other than wish-fulfillment fantasies, who finally helped make things clear. I told her about my time machine story, the music lessons and the television tapes and The Tonight Show and John Lennon.

"Your time machine would never work out the way you wanted it to work out," she said.

"Because I wouldn't have let you do any of those things," she said.

"Because I don't believe that any of those things are good things," she said. "The music, the movies, the television, the transgressive stories. The things you want are wrong, and people shouldn't want them."

If I had decided, then, to write the time machine story honestly, then maybe I was one beat away. Maybe she had given me my ending. For the first time, something in the story made the story true.

But I didn't want to write the story anymore, because by then it had become yet another iteration, another version, of the story I had already spent ten years and two books telling, the ever-wallowing in the grievances of childhood, in the desire to do it all again, make it better this time. As I thought about her words, their harsh closure, I began to feel a small and growing freedom. There would be no changing the past, and the only thing left to stretch out into was the future.

The time had come to find a new subject.
Posted by The Story Prize at 7:35 AM