In the 30th in a series of posts on 2014 books entered for The Story Prize, Elizabeth Eslami, author of Hibernate (Ohio State University Press), discusses the process of writing and the aftermath of publication. 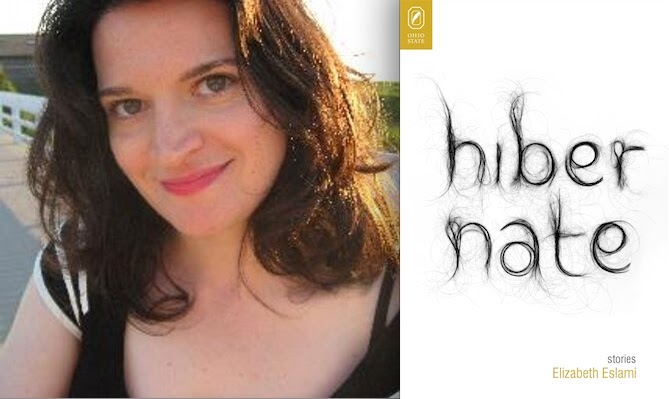 If you build inside a garage, you tend to make a mess. An office is no different. Never mind the ergonomic chair or the ceramic frog with pencils sticking out of its mouth. When you publish a book, there’s sawdust everywhere. A lot of “no” from people whose refusal to believe in you matters, a lot of “no” from people whose refusal to believe doesn’t matter, not in the least. The mess of all the revisions you’ve made, all the books that have sprung to life while you’ve been waiting—books that have plopped right out of people, the exact way my mother once said one of our neighbors in South Carolina gave birth by accident, the kid dropped right out of her when she went to squat—this mess, which, by now, is three feet deep and spans the floor is the thing that is most surprising about publishing a book.

No one ever thinks of the mess.

What they’re thinking of is the end, when the edits have stopped and you’re drinking orange juice in your rented brown shoebox in Oregon and the dog is going nuts because the UPS man has come with a box of books. Author’s copies. A box of dreams, but that seems awfully romantic when you’ve got orange pulp in your teeth and the dog is up on the couch now, lunging at the window, which you’ve tried to break her of, but dammit if she doesn’t use that nose-smeared window to deter the UPS man, who is going to leave that box on the mat because he values his life.

The first book, the first time, the first box—you weep. If you don’t have children, people wink and say the book is your child now, finally birthed into a world that smells of motor oil and paint thinner and grass clippings. Even without children, you imagine that writing a book and having a child are probably nothing alike. There’s no reason for the analogy, to make ink into blood or paper into flesh. The world is plenty big for distinct pains and pleasures.

Now you have published a book. To be read and ignored, shredded and praised, bought and sold and remaindered, ARCs found two years later, their half covers flapping open in used bookstores like someone’s desperate wave before you walk away. The one thing you never imagined in all those years of submitting and getting rejected and saying words like “mutual exclusivity policy” is that you wouldn’t be working on this book anymore.

But now you’re not. And you won’t ever again. You’ll talk about that story as the years go by, but that talk will begin to feel far away, as if your characters are friends from grade school whom you think of fondly, though you’re not quite sure what it was that endeared them to you, what you did together other than make bracelets out of clover and pull spitballs from each other’s hair. You shared minor trauma, you know that much, crotch falls off balance beams, bloody noses. Who are these people now?

You have new characters with the second book, ones you know you’ll one day say good-bye to. How will you know how to do it the second time around? Have you learned a single thing about how?
The second book, the second time, the second box—the UPS man leaves in your garage while you’re tending to a basement flooded with sewage. It’s a different rental this time, in Connecticut, where foxes sometimes creep up into the yard and put their ridiculously small paws against the rubber trashcans. Where everyone is afraid of high taxes and rabid raccoons and your neighbor cuts the grass with his shirt off, his belly a purple cabbage in the summer.

Here comes the UPS man, all the way up into the garage with your books. Author’s copies. The dog is too old to bark, to see much of anything.

That’s okay, because by now you embrace the mess. The impermanence of dreams, the fading smell of glue. By now you know how to use a shop vac to suck up gray water, which is the romantic name for water after you shower, which has flooded all those old notebooks where you wrote about wanting to publish your book. Gray water. You’ve learned that much, even if you haven’t learned what you’re supposed to do after you publish, how you’re supposed to say goodbye for the second time.
Posted by The Story Prize at 8:03 AM