In the 40th in a series of posts on 2011 short story collections entered for The Story Prize, Lynne Barrett, author of Magpies (Carnegie Mellon University Press), describes the "delicate negotiations between character, form, and tone" that occur when she writes a story. 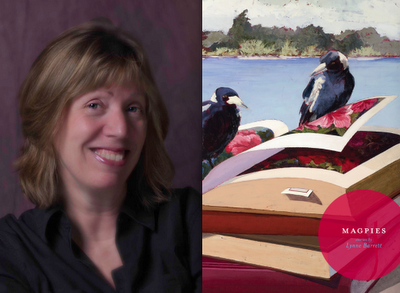 A story, I’ve discovered, is an imp in disguise. At first, some happy morning at my writing desk, it promises to be easygoing. But soon it drags me from the table during dinner and drives me right past the turn for work. I fill scraps of paper with its slightest hints. While a friend is telling me about a sad situation, the imp suggests a character’s next move, and I have to muffle a laugh.

I work at the story till there’s at least a full draft and preferably several overstuffed ones. I have learned it’s best not to question or criticize it too much till I have a lot amassed, because the story will, as I revise it, soon enough bring despair. Often, it has beckoned me to try some form I thought would be fun that turns out to be hellishly hard. To orchestrate a narrative that uses the links and “pages” of a website or to construct an abecedarian about a hurricane season is obviously a challenge. But what isn’t? To show two lovers awake during a thunderstorm, one telling the other a story from his past, seems simple, but the telling, the listening, the questions asked and answered, have to change the relationship forever, which isn’t simple at all. Nor is a tale that spirals through thirty years. And what’s to be done when a malicious gossip columnist spits out lizards? As I revise, I find that every invention and deletion involves delicate negotiations between the characters, form, and tone, and when I get impatient and yank, the imp tells me I’m going to ruin the whole thing if I keep that up.

At this point, I put the story aside, saying it must rest. I don’t think of this, you’ll notice, as me resting. No, the story has become alive enough that I worry it’s getting tired and confused, it’s stressed out and likely to succumb to some infection from drastic cutting or forced emotion, it’s in danger—from me. I’ll start something else that promises to be easy—a fast little riff that will just take 8 pages, won’t it?

My old imp broods among its be-scribbled drafts in the crate called, optimistically, “new stories,” and shivers and simmers in the hard drive, waiting. Until (and this might take a week or a year), I hear it croon, “Hey, come take a look. Give me another chance.” And since that 8-page story has stretched to 33 and looks to have some very serious, possibly fatal, malady, I put it aside and return to the other, which, after all, may not have been so doomed as I thought.

I take one fresh printed copy out of the house—this is my rule—ideally finding somewhere pleasant to sit among strangers. With no pen or pencil in my hand, I read it as coolly as I can. I may rediscover its old charms—there’s that sense of humor, and it’s got some muscle as it swings from one scene to another. But its balance has shifted. The story tells me, after our time apart, that it’s got some concerns I hadn’t been aware of. Let’s say it’s that abecedarian one, which I thought was about the mischief some men get up to at the warehouse they’re converting to a private hurricane shelter. It’s now about the exposures and mercies of a marriage, and it raises questions about anxiety and courage. The characters weren’t just goofing around; did I underestimate them?

All this seems worth my renewed devotion. But I hesitate because I notice that something— a turn of the action, or a character’s voice, or simply one line—sticks out. It’s bolder than the rest, or stranger. Perhaps this was the problem all along. Should it go? Can I sand it down or lop it? No. Reluctantly, queasily, I see that what obtrudes is what I most need. It simply demands that everything else must match it. Sometimes, I’ve learned, this thing—this imp’s particular oddity, let’s call it—will be, when the story is published, what readers say they most like, though they don’t (unless they are writers) realize how much had to be done to deserve it.

Again smitten, I follow the story home, ready to try to give it what it wants.

And this, which I call my “writing process,” this tango of infatuation, fervor, frustration, abandonment, rediscovery, tenderness, antipathy, and surrender, I hope to keep dancing with the imps.
Posted by The Story Prize at 2:46 PM