In the 52nd in a series of posts on 2011 short story collections entered for The Story Prize, Michael Martone, author of Four for a Quarter (FC2), lays out the structure of his collection. 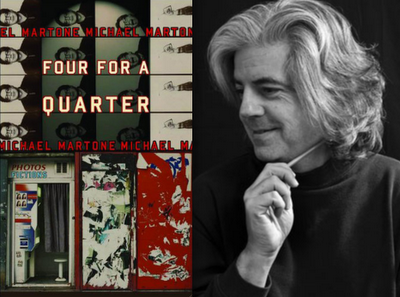 How did you decide to arrange the stories in your collection?
Arrangement is the story of this story collection. Some might label Four for a Quarter “experimental” fiction, but I never liked that designation. I think Chekhov’s coupling realistic techniques with Freudian ideas of depth of character was a very fruitful experiment. I wouldn’t call my fiction experiments, or I would, I guess, call it experimental in the way I would call every attempt to write fiction an experiment. Writing prose is always an experiment in arranging and/or rearranging the forms and content, words and sentences, styles and idioms of earlier fictions and nonfictions. I think of myself as a very old-fashioned formalist, writing fictions that foreground form. So, in this case, I didn’t write a set of stories and then arrange them afterward as much as I thought of the form of the book before I wrote it and then, wrote the individual pieces to complete the predestined formal structure. Form follows function? Function follows form? Hard for me to say at this point.

There are 44 fictions here. The fictions are arranged in four sections. The first two sections each have 11 fictions. The third has 10 and the fourth 12. The idea for the book started with the old photo-booth photo-strips. I collect them. I have my students as a final project tell stories by means of a photo-booth photo-strip narrative. What I noticed is a pattern in the four shots. The first and second pictures are polite, staged, planned, arranged, but the third seems to be the anomaly. Mugged. Goofy. The crazy shot where self-consciousness (that one is having one’s picture taken) takes over, revealing the artifice of candid portraiture. It is an attack on the invisible fourth wall of transparent presentation. In the third shot, we break character. The fourth shot then is a kind of recovery. A desire to make sure there is “one good one” in the bunch. An attempt to recompose oneself. I wanted then for the overarching structure of the book to represent this syncopation. The book is a waltz as well as a march. The little skip also allows the author’s bio-note at the very end to be incorporated as the last fiction, another story, and not something that falls outside the “body” of the book.

Each of those 44 fictions is divided into four parts. Many of the third parts of those four part fictions are also anomalous asides in the flow of the individual stories. But not all. And of course I should say that all of the fictions are also already about a four: the four winds, directions, humours, blood types, horsemen, gospels, questions, corners, Beatles, etc., etc., etc., etc. I do regard the four blurbs on the book’s back cover as a 45th fiction, and perhaps a ligature to the next book I am going to write. I asked my blurbers not to do a blurb but write a very brief story based on the number 4. I encouraged them not to read the book, all the better to help them write a story in the form of a blurb of an imaginary book. And the final story in the collection, “Contributor’s Note” is written not by me but by four other writers I asked to sit in.

Let me say this about all that. I know you are shaking your head. You asked a simple question about arrangement and you get this complex obsession about “arrangement.” Some of those who like to use the appellation “experimental” do use it as a kind of code. We are meant to understand that here in these “fictions” the reader will find cleverness, tricks, games, and riddles but no real emotional content that the “traditional” epiphanic dramatic story is designed and constructed to animate and release. That is to say that this kind of over-realized fiction, fiction that wears its form on its sleeve, has no heart. Oh, that may be true! It quite possibly is true. This book, then, is constructed as just another kind of elaborate amusement, some sort of mechanical booth, say, that takes a series of snapshots of its subjects wearing many highly exaggerated and artificial masks. But I hope that in the book’s architecture and in that dilapidated analog arcade booth there is, yes, a beating heart, a heart of four (four!) chambers, that circulates an empathetic vitality within its conscious anatomical arrangements—a systolic/diastolic stutter, a dub DUB squared, a surprising fibrillation, and, at last, the dénouementic code blue, bluer than the bluest blue.
Posted by The Story Prize at 10:00 AM