In the 48th in a series of posts on 2011 short story collections entered for The Story Prize, Maureen F. McHugh, author of After the Apocalypse (Small Beer Press), tries to figure something out. 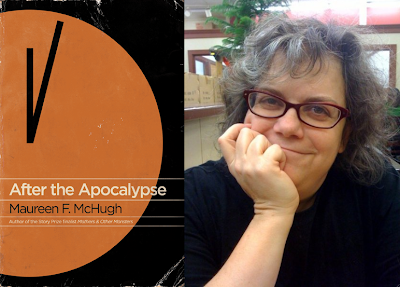 When I was first starting out people always said, ‘Write what you know.’

Seriously, no one is interested in what I know. I’m not interested in what I know. Unless someone has done something truly, seriously, oh my god amazing, trust me on this. It’s like going to a party and talking too much. Even if someone has done something truly, gloriously amazing, like cloned the first human baby, chances are that a lot of it is about getting grants and doing the same thing over and over with pipettes and petri dishes and yelling at post docs and people really only want to hear the fun parts.

After I wrote all the stories in my collection, After the Apocalypse, I moved to Los Angeles. After the Apocalypse might be described best as ‘oh my god I’m fifty and the economy sucks and what is going to happen?’ (except that one of the stories has zombies in it. I’m not really that nervous about zombies.) I am anxious about the future because big chunks of it (it is becoming more and more difficult for me to avoid this knowledge) are out of my control. After I moved to Los Angeles, I realized that I had written a book about bad things happening and I didn’t have an earthquake kit. This could be embarrassing—Writer of Apocalyptic Fiction Unprepared For Earthquake. This is exactly the kind of thing I am trying to figure out in my writing. What can I be prepared for and what is basically out of my control and how awful is what is out of my control going to be?

Earthquake. The Big One. Definitely out of my control. Moving to Los Angeles, in my control and maybe incredibly stupid, but already done. Getting together some candles, some batteries, and five gallons of water? Something a moron could do. Then, of course, I worried about where I had stored the water because the water is in plastic jugs and what if the house falls on them and ruptures the jugs? But thanks to writing this collection I at least have an earthquake kit which is an unexpected benefit of writing.

(I was in the grocery store in August and they had back-to-school earthquake kits. Sometimes the problem with being a writer is that reality is so much stranger. Who would make that up? Back to school earthquake kits have those single serve lunch box Jello™ packs in them, among other things. I suppose because pudding snacks would be too tempting to break into before the earthquake.)

I don’t always know what it is that I don’t know the answer to. I often start a story with two strands—for instance I saw a documentary on television about something called Reborns, which are incredibly life-like infant dolls sold to adult women. I was worrying about what I would do if I had to get a job besides writing (I obsessively note those signs on fast food restaurants that say they’re hiring.) The story that came out of those two things is called “Useless Things” and when I started it I had no idea what it was going to be about.

I would not actually recommend this as a way to write. It means a lot of beginnings go nowhere and a lot of stories get about three-fourths of the way done and then chunks have to be thrown out and re-jiggered. I’ve tried outlining but once I write the outline I already know what’s going to happen. Then I’m already bored. I don’t mind revising, which is mainly about making sure that other people can read the story and feel something or even understand what is going on. But if I’m not finding out something when I’m composing, then the story feels lifeless.

I suppose my next collection could be called Why Don’t I Eat Less and Exercise More but that’s not about questioning so much as it is self-loathing, and frankly, who wants to read that?