In the 56th in a series of posts on 2011 short story collections entered for The Story Prize, Stephanie Watts Powell, author of We Are Taking Only What We Need (BkMk Press), discusses a story she wrote in one six hour sitting that took ten years to revise. 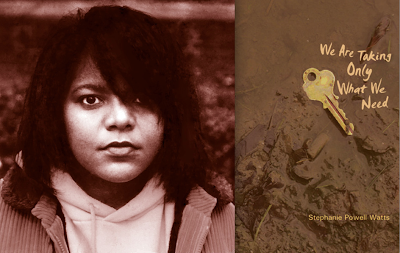 Which story in your collection required the most drafts or posed the most technical problems?
I wrote a draft of “Unassigned Territory” about fourteen years ago in one wonderful evening on one of the couch loves of my life. That couch was a beauty: deep red cotton, flecked with almost imperceptible surprises of blue and yellow, traditional strong rolled arms, firm padded body (not vulgar and overstuffed), real wood skeleton. A couch’s couch. I loved that couch from the day I saw him, needing new upholstery, shoved in the back of a dark Salvation Army like the runt of the litter, whimpering at a frequency only fellow couch people can hear, “love me, I am good.”

I snuggled into my couch and couldn’t stop writing this story. Before I realized it, time had ticked away and flown by and flashed and disappeared in all the ways time does when you are miserable and watching mindless television because no one you love will call and you can’t fake the enthusiasm to call them or when you are deliriously happy because the baby you weren’t supposed to be able to have won’t stop belly laughing at his bunny’s flopping ears. Or you are quiet, the world is quiet and there are no emergencies anywhere, just quiet, harmless people breathing the same cool air. OR when you have written something you suspect may be fantastic, so good, when you re-read it you cry your own fool self. In that one sitting on my beautiful couch, I had a seventeen page draft that I believed was a masterpiece. If you write, you know exactly the feeling I mean. That wonderful, full sensation that you, glorious you, did it and it is very right and every word clicks into place like a combination lock. Tick, tick, all done. Perfect. That happy-making draft took me about six hours. But the revision for “Unassigned Territory” took the next ten years—not every day or even every month, but a tickle on my back on a place I found impossible to reach for TEN YEARS.

It is an understatement to say that my first draft was not perfect. Let’s just say it wasn’t very good. In fact, if there are three words strung together that remain from that original draft, I would be shocked. Though I was wrong about the quality of that first draft, I knew there was something important I was trying hard to say. For me it is significant that the title has not changed in all the revisions. I suspect what I wanted to get across all those years ago had something to do with the desperation of the striving outsider. What is claimed? what is taken in a person? in a life? and what can you, if you have the courage or stupidity, claim for yourself? The girl I wanted to be, still want to be: included, safe and uncompromised, belonged if that is even the right use of the word, was always trying to have a say in that story. Can you live in this world without compromise? And, more to the point of my story, is faith in anything always a compromise?

Oh compromise. Though my red couch was a deep love and a long-lasting one, I had a first and unforgettable. And in the way of these stories, this original couch-love was unrequited. I fell hard for an asymmetrical curving back, orange fur-covered beauty in the Goodwill in Raleigh, North Carolina. Fifty dollars, a lot of money for me in those days (in these days too, who am I kidding?) and I visited that Goodwill just to get a look at his sprawled, angled lusciousness. At the end of the week, when one of my jobs paid me the mere pittance that amounted to a week’s just-over-minimum wages, that couch would be in my own tiny, one bedroom apartment, with the occasional (thank God) cockroach so large the sight of it would take my breath. It has been twenty years since I went to that thrift store, consumed with the worry of how I would get that seven-footer in my Hyundai only to find an open spot where the body had been. The couch, MY COUCH had sold just the day before. I was crushed. Do you understand being crushed? When the body of you, a person, straight and complete becomes compacted into a mass, no blood flow, no errant thoughts, the opposite of hollow, a thick dead cube with useless systems, dead functions. Too much sentiment for a couch, I know, but I fell hard for this one. But what I am hoping to tell you is sometimes THE ONE isn’t really THE ONE. Though I imagined our glorious life together, that couch and I were not meant to be. This is not sour grapes talking. Sometimes you have to search like hell for the real true thing. Loving is so good, and like the soul song says, ain’t nothing like the real thing, but trying again, loving again, revising again and again and a-freaking-gain can sustain you too.
Posted by The Story Prize at 6:00 PM