Pamela Ryder: The Story of the First Line of a Story

In the 44th in a series of posts on 2011 short story collections entered for The Story Prize, Pamela Ryder, author of A Tendency to Be Gone (Dzanc Books), finds a starting point. 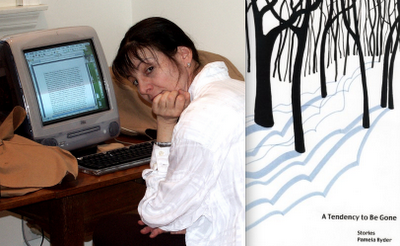 If a have a first line, I have a story. But that first line never comes sitting at a keyboard. It usually happens outdoors, triggered by a glimpse of something most mundane that becomes odd—becomes luminous for me—with language. The first line of "Three Men" happened while I was standing in the yard and looking up at the contractor on the roof. He had said my little house was falling apart, top to bottom, and he kicked down a shingle. “He is kicking down shingles,” I said to myself aloud, to hear the words and have them ready for the moment when I would sit down at my desk to begin. And I kept the sentence into the present tense, as I frequently do, to give it a sense of immediacy. The repetition of the short “i” sound in “kicking” and “shingles” clinched it for me, as did the man’s position on the roof. His being up there gave the story form, and it was just a matter of keeping to the form as I went along making the story, carrying the language of the rot and decay from the roof right down to into the cellar and further, into the very earth.
Posted by The Story Prize at 7:48 AM