Jeffrey Ford on Storing Away the Colorful Bits and Pieces

In the 25th in a series of posts on 2012 short story collections entered for The Story Prize, Jeffrey Ford, author of Crackpot Palace (William Morrow & Co.), tells about snatching up details of things people tell him and turning them into stories (or holding on to them for later). 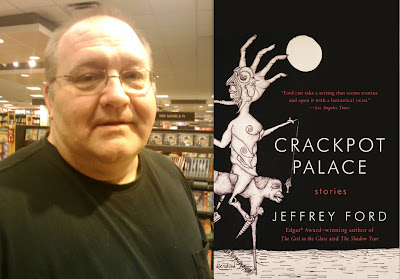 Q: If you've ever written a story based on something another person told you would make a good story, what were the circumstances?


I don’t think I’ve ever written a story based on someone’s recommendation that it would be a good story, but a lot of times people tell me things just in passing conversation that I'm happy to snatch up and make use of.

A friend of mine told me that he went to pick his kid up at daycare one afternoon and found that the teachers had taken out the dress up box and all the kids were in old costumes. He noticed that there was a boy wearing a fake mustache, sitting slumped over and crying, saying he couldn't remember any more what it was like inside his mother’s stomach. My friend said the kid was trembling, like the realization had just struck him. Standing next to the boy was a girl in a gauzy pink princess outfit, holding a wand. She waved it slowly over the boy's head and said, “Forget, forget, forget....” All I can say is that the way he told it, it seemed to me that this had been an authentic experience. It didn't matter, though, as it was a little too neat to use as it was. Over a period of months this incident bubbled up in my thoughts quite often and I’d think about it. Eventually it formed itself into a story, “The Scribble Mind.”

When we lived in South Jersey, the guy who lived in the house behind mine, Jake, told me that his cousin, Bobby, was employed down by the Delaware river. His job was to dive to the bottom of the river, using only a snorkel from K-Mart and carrying an acetylene torch at the end of a few hundred feet of hose connected to canisters on shore. There was a wreck of an old yacht down there, and he was supposed to use the torch to remove the brass from it. At night, he stayed in a trailer next to the river, drinking 40s and snorting speedballs. “Bobby’s the Walking Prince of Death,” said Jake. I met Bobby eventually, and I could tell instinctively that he was a dangerous character, but he was also funny as hell. For the time that he was around, maybe a year before he wound up in jail in Camden for assaulting and robbing an old lady, the cousins would hold a poker game every Thursday night at Jake’s house. I heard a lot of stories at those games and, after all was said and done, I made a story out of them, “The Golden Dragon.”

Stories and even pieces of stories give birth to stories, like some virulent meme that uses human beings to manifest itself in the world. I keep all the interesting stuff—the colorful bits and pieces of stories people tell me stored away in my head for future use. Here are two I've been holding for a long time. Maybe there's a good reason why.

When I taught college I had a student once who missed a lot of classes. She could have done very well in the course if she’d shown up more. Near the end of the semester, she dropped out. I got a call from her. She explained that when she would get her period, she’d suffer bouts of amnesia for a few days. She hinted it had something to do with hormones but that it wasn’t absolutely clear. It seemed outlandish, but I figured it might be possible. I told my boss about it and he laughed and said, “That’s bullshit.” I’m not convinced he was right, but either way it seems like something that belongs in a story.

When I lived in Binghamton, in upstate New York, I had a friend, Barney, who told me to be on the lookout for Kozlavsky. In all the bars up and down Clinton Street in the first ward, in the lobbies of the two local motels, in the offices of gas stations and the check cashing place, there were oil paintings by a guy who signed his name Kozlavsky. My friend gave me a walking tour one bright Saturday of the local Kozlavskies. The painter had three basic styles, all rendered with a kind of naive approach. One was nature scenes—deer, jumping fish, a cabin in the woods by a lake. The second type was all about flying baby heads, little fat cheeked, hollow eyed heads with wings on them. They flew in various formations across a brown landscape beneath a brown sky. The last type was portraits. My friend told me that when he’d first moved to town, he had an apartment with a big Koslavsky hanging in the living room. The land lord of the place was an insanely angry man, always yelling if the rent was even a day late. Still it was a cool old place, and he and his roommate liked it and took an interest in the painting—a study of a stern looking, dark eyed man, standing in a brown landscape with three baby heads flying over him. They wondered if it was Kozlavsky’s self-portrait. Later on they discovered the proliferation of the artist’s paintings all over town. My friend said he’d inquired a few times about the painter in the local bars, and people said they knew him and that he frequented The Palace A and The Marble Grill. Sometimes Barney and his friend went down Clinton Street, hitting every bar in hopes of running into him, using their memory of the figure in the painting as a guide to maybe spotting him, but they never did. Barney and his roommate were big dart players, and he said he didn’t remember how it happened, but they were drunk and high one night and his roommate threw a dart at the Kozlavsky painting and it stuck right into the center of the figure's left eye. It was just such a perfect throw, Barney said it inspired him to throw one himself. A direct hit in the figure's lips so it looked like the dark eyed man was smoking a dart. After that, it was bombs away. In a week's time the Kozlavsky portrait was riddled with a thousand holes. At the end of that week, they were a week late with the rent and the landlord showed up. He let himself in and caught them sitting on the couch smoking a joint. He started yelling about the rent, and then he noticed the painting. He went silent, stood still, and Barney told me that in that instant he and the roommate realized the guy in the portrait wasn’t Kozlavsky, it was the landlord.
Posted by The Story Prize at 9:00 PM