In the 16th in a series of posts on 2012 short story collections entered for The Story Prize, Stephan Clark, author of Vladimir's Mustache (Russian Information Services), reveals some of his sources of inspiration. 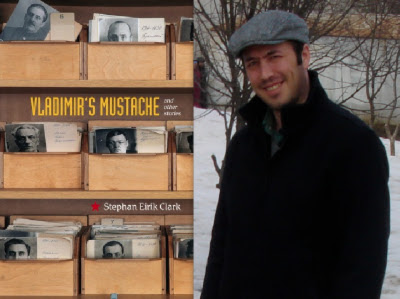 Where do you find inspiration?
1.  Research
I started the title story of my collection almost ten years ago, after reading a book review for a biography of Ribbentrop, the Nazi Foreign Minister. In it, I learned that the Nazi bunting used to decorate the Moscow Air Field on the day Ribbentrop arrived to sign the Molotov-Ribbentrop Pact had first been used in an anti-Nazi propaganda film. There was something wonderfully absurd about that, so I tried to think of who might have been exposed to both of the flag’s uses.

I settled on an actor—not a star, but a bit player who’d have to work at the Air Field on those days he wasn’t working on a film. From there the story became like one of those Russian nesting dolls. Because the story took place before the Soviet Union’s entry into the Second World War (or the Great Patriotic War, if you’re looking at it from a Russian perspective), I had to research Stalinism and the Great Purge. Because my character was an actor, I had to research the early Soviet film industry, Socialist Realism, and finally the early days of Stanislavski, which ended up being the key to the story. My protagonist would be a Method actor, I realized. One who learns the danger of losing himself in a part after he’s cast as Hitler in the midst of a Stalinist purge.

2.  Headlines
The first story that I completed for my collection (the title story would take several years to get right) reimagines the failed KGB coup of 1991 in a way that’s meant to serve as a kind of mash-up of Russian and American culture. Like “Vladimir’s Mustache,” I started this story in the fall of 2003, not long after the prison camp at Guantanamo Bay had opened, when concerned citizens still found the Patriotic Act worthy of debate. It was at this moment in our cultural life that I read about the U.S. government’s plans—through DARPA, I believe—to data mine everything we do on the Internet in order to protect us from terrorism. I’m sure many people thought this was a great idea. If you don’t have anything to hide, what’s the harm, right? But it just struck me as neo-Stalinism, the type of governmental over-reach that conservatives are fine with at any cost so long as it’s done in the name of national defense and doesn’t include a tax (hidden costs are fine).

Still, however much I was opposed to this, I couldn’t imagine anything more painful than a faithful fictionalization of what was going on in our country. I didn’t want to add another voice to the echo chamber. We weren’t changing any minds, I thought. We were all of us just yelling. So I attempted a kind of triangulation between my subject and my target, which allowed for me to tell a lie about Russian history in order to maybe tell a truth about contemporary American life. For who? I don’t know. But the result was “The Secret Meeting of the Secret Police,” my first published story. In it, Gorbachev figures out a more cost-effective way to spy on all of his people, which in turns makes the operatives of the KGB, who initiated the coup against him, fearful for their jobs. The most cost-effective way, of course, is the Internet. With it, you didn’t have to knock on anyone’s door in the middle of the night. You don’t even have to leave the comfort of your own home.

3.  Personal Experience
Because I moved around a lot as a child, and have continued to move around as an adult, I’ll never have a Yoknapatawpha County that I’ll be able to describe better than anyone else. If I want to describe anything honestly and in great detail, I have to stick to those times I have lived through (or those times from which few people remain). That’s one reason I’m so drawn to Russia and the Soviet Union. It was still a world power when I was in high school, a permanent fixture on the news, and yet a decade later, after Gorbachev had given way to Yeltsin and Yeltsin had given way to too much drink, the country was all but an after-thought.

That began to change for me in 2000, when I was living, as chance would have it, on the shores of the Russian River in rural northern California on the same piece of property as my landlord. This man was a California cowboy, a carpenter with eight fingers and one thumb. When I went to deliver my first rent check to him, his daughter-in-law answered the door and told me with a half-smile, “Johnny’s in The Ukraine getting himself a new wife.”

When he came back, he had more than just a wife: he had a daughter and a son, too, the former a girl of seventeen or eighteen who later had to return to Ukraine, because immigration officials here had considered her too old to be deserving of a Green card like her younger brother. It was thinking about what became of her, alone in Kiev, that started me thinking about the former Soviet Union and then had me applying for a Fulbright Fellowship to Ukraine, where I’d end up living for a year, researching the mail-order bride industry. The year I spent there—and one more in Russia—gave me the material I needed to write the handful of stories in my collection that are set against the backdrop of the mail-order bride industry or the post-soviet present.
Posted by The Story Prize at 8:19 PM