In the 20th in a series of posts on 2012 short story collections entered for The Story Prize, Michael Downs, author of The Greatest Show (Louisiana State University Press), discusses his reluctance to meet the real life survivors of a catastrophe he was writing about. 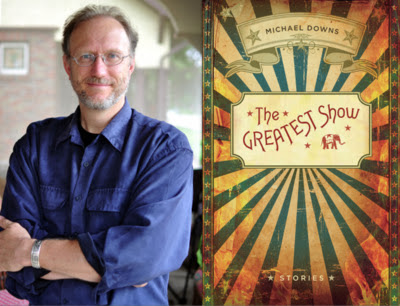 “How many of you survived the fire?” I asked.

I didn’t have to say what fire. We were all–more than 125 of us–there to talk about the same disaster. Sixty-eight years ago to the day, a circus big top, engulfed in flame, had collapsed on a crowd in the city where we now gathered. The fire had brought us together, that and the burns and animal cries and the smoke–imagined, real, remembered.

July 6, 1944. Hartford, Connecticut. On a muggy, stifling day, some eight-thousand people filled the tent for a matinee performance of the Ringling Bros. and Barnum & Bailey Circus. As the Wallendas began their aerial performance, people glimpsed a flash on one side of the tent. Within minutes, fire engulfed the entire canvas, which had been waterproofed with paraffin. Heavy flaming sections tumbled down. The injured numbered in the thousands; the dead were 168.


I’m a Hartford native, born two decades after the fire. Nobody I know went that day, and no one I grew up with was burned or trampled. But my dad, who was three years old, might have gone if not for a family argument. My grandparents were alive in Hartford then. The fire is in my history, its smoke an inheritance.

I wasn’t there, but I wrote about it in a book of fiction. I’ve only imagined the grease-painted faces smudged with ash, the elephants who lingered afterward on the grounds, the bodies placed on cots in the state armory for identification.

Yet people, mostly gray-haired, filled a theater to hear about the stories I’d created–and then to tell the stories they had lived.

One man spoke about his father, a police officer who had saved people by tossing them up and over cages filled with terrified animals. Another woman recalled her grandfather, a firefighter who had died in the blaze. Several talked about how, like my father, they’d nearly gone to the circus that day, but fate had intervened and spared them.

For many years, I was a newspaper reporter. For a reporter, true stories are the only ones that matter. We respect them and need them. The best leave us in awe. We revere them.

Now, I write fiction. Over the ten years I’d worked on the stories in The Greatest Show, friends and acquaintances offered to introduce me to people who had survived the fire or had been firefighters and fought it. Thank you, I’d say, and I might write down the information to be polite. But I never did talk to anyone. The journalist in me asked why not? Why not talk to people? The fiction writer shushed him.

The journalist said, “But I’ve done all this research!”

And the journalist had. He’d read oral histories and scribbled notes from Stewart O’Nan’s great nonfiction book about the circus fire. He’d searched archives and studied newspaper clippings. He’d even discovered a Red Cross brochure from the 1940s that used the circus fire as a case study for treating burn victims. The journalist-in-me was scrupulous about the truth of the event. With regard to the fire, he would allow me to neither invent nor change a fact.

The journalist held his pen and reporter’s notebook, waiting. The fiction writer shrugged: No interviews with survivors.

But now, here I was in a room full of people old enough to have known the horror inside that tent. And I asked: “How many of you…?”

In that moment, I understood the fiction writer’s reluctance to meet people who had lived through the fire. If I’d met these people before I’d finished imagining my characters’ lives, I would have respected the true stories, honored them, been humbled and thus hampered by them. Imagination by necessity presumes. In its arrogance, it re-invents the world. It’s a paradox, but to respect the real pain of survivors and create something like it out of my imagination, I needed to not know them. Had I mixed reality with fiction to that extent, I would have diminished both.

Of the eight who raised a hand, none spoke. But afterward, I posed for photographs with a woman who had been at the fire, and a man named Larry showed me the burn scars laced across his left forearm. He’d spent half a year in a hospital undergoing skin grafts. Like Teddy Liszak, the boy my imagination sent to the circus, Larry had been three years old. I signed his copy of my book. He had such a wonderful laugh.
Posted by The Story Prize at 8:26 PM