In the 19th in a series of posts on 2012 short story collections entered for The Story Prize, Margaret Hermes, author of Relative Strangers (Carolina Wren Press), reveals the sources of her ideas and her influences. 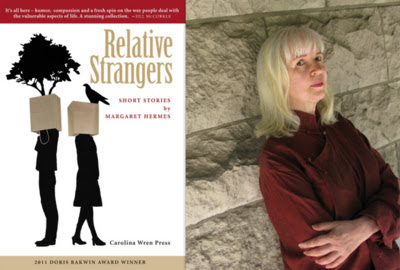 What made you want to become a writer?
I had four brothers, no sisters, and shared a tiny bedroom with my maiden aunt for the first seventeen years of my life. I had no choice but to write.

But heritage played a part as well. My mother grew up with a passion for books in a small coal-mining town. Having no library in town and no means to purchase books, she began writing her own in grade school. Mostly tales of adventure in the American West, written on butcher paper and shared with friends and their families. Instead of becoming the next Zane Grey, she turned herself into a full-time housewife and mother, so somebody had to take up the pen.

Where do you find inspiration?
I’ve never been comfortable with the word “inspiration.” To me it suggests a reliance on some power outside the writer’s control. A Phrase Fairy or Santa Clause who leaves ideas under your pillow or beneath your tree if you’ve been good. And I suppose I’m reluctant to share credit for my labors.

What's the shortest time it has taken you to write a story?
“Meet Me,” one of the stories in Relative Strangers, took less than two hours, plus subsequent airbrushing. I had asked my partner to pick a title for a story out of the air. I wasn’t feeling inventive and apparently neither was he. In a hurry, he declined and began to lay out plans for the afternoon. "Meet me--" he said and I said, "That's it!"

What's the longest time it has take you to write a story?
“Growing Season,” another in the collection, took two years. That’s a story enriched by fragments from other people’s pasts. Various men among my acquaintance shared details from their youth that lodged in my memory and gave heft to the boy who matures over the course of the story. I worked on the structure to achieve a flow – an undercurrent really – between two forms of bigotry, religious and racial. So the innocence lost in this coming of age story is more than just sexual.

How often does an idea for a story occur to you, and what triggers those ideas?
Some days a dozen story ideas will occur to me, some weeks none. But I haven’t written all the stories that come to mind on those days teeming with ideas. Or even remembered the ideas. On the other hand, I usually manage to bleed out something during the parched periods.

The triggers are wildly various: snatches of overheard conversation; a visual image; a childhood memory; dreams. The opening story in Relative Strangers, “The Bee Queen,” was sparked by an incident that haunted me since childhood. “Parings” came directly from a dream. On two occasions that I recall, whole plots came to me while listening to classical music at performances by the St. Louis Symphony. And often the triggers remain a mystery to me. Sometimes the germ of an idea will lodge in my brain. I’ll be only sporadically conscious of it rubbing around in there but given enough time it might acquire sufficient nacre to become a story.

If you've ever written a story based on something another person told you would make a good story, what were the circumstances?
I’m always culling story ideas from conversation, ones that I’m engaged in or ones overheard. Writers are magpies; scavenging is in the nature of the bird.

Mostly, though, the tales offered as outright gifts never become mine. However, an amazing Missouri woman was the model for the star character in “The River’s Daughter.” Cattle rancher, inheritor of her family’s Century Farm, operator of a celebrated bed-and-breakfast, proud horsewoman, environmental activist, Carol Springer is also a master storyteller. My challenge was to take the story of her fight against the U.S. Army Corps of Engineers and developers who wanted to dam the Meramec River and use it as material, not simply relay it. I was going for fiction, not nonfiction. To achieve that I had to keep Carol offstage, so I created a sister, a narrator with a distinctly different voice.

Where do you do most of your work?
I write my first drafts longhand, so my stories are typically begun anywhere but in my study where the long process of revising usually takes place. In that commodious room, I planted the dining table from my parents’ house at which I used to do my homework against one wall and its matching buffet that now supports two bookcases against the opposite. My desk is situated so that my back is to the larger window in the room, as I am too easily distracted.

What writer or writers have you learned the most from?
How to choose among Margaret Atwood, Ursula Le Guin, Barbara Kingsolver, Marilynne Robinson? Or the short story virtuosos William Faulkner, Alice Munro, Ray Bradbury, Flannery O’Connor, John Updike? (I’d like to leave Updike off, but I can’t.) Edgar Allen Poe taught me while I was still in grade school that every story is a mystery. And then there’s Antonya Nelson. And everybody else whose bibliography is passing before my eyes.

Since the list keeps expanding the more I try to shrink it, I’m going to focus on writers I devoured when I was very young. 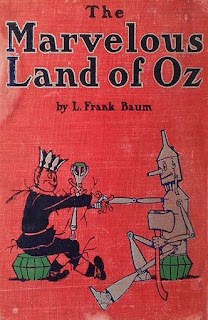 I was enamored of the Oz books. L. Frank Baum reinforced for me that little girls are never safe but they can be resourceful, and he taught me to look for the man behind the curtain. Or to create him.

I was addicted to L. M. Montgomery’s zillion Anne of Green Gables books, even though Anne seemed to lose her fire (not before inspiring me to dye my hair red) during the course of the series. I learned from the volumes that disappointed me as well as those that delighted me that minor characters make a major difference.

P. L. Travers thrilled me with the unpredictable Mary Poppins. Though the situations in the novels are preposterous, the people are not. I was treated to characters whose complexity is revealed by a few precisely drawn strokes. And with each of Mary Poppins’ heartbreaking departures, came reinforcement of the invaluable lesson that literature and life do not provide happy endings.

And then there was Lewis Carroll and the Alice books. His love of word play and italics (and parentheses) gave me an early, exhilarating sense of the freedom to break rules. As well as an appreciation for the rules.

These writers provided me with youthful heroines. Two were men; the other two published behind the camouflage of initials. I’m certain I learned something from that as well.
Posted by The Story Prize at 10:10 PM