In the 21st in a series of posts on 2012 short story collections entered for The Story Prize, Steve Mitchell, author of The Naming of Ghosts (Press 53), observes the world from a table outside a Winston-Salem bakery. 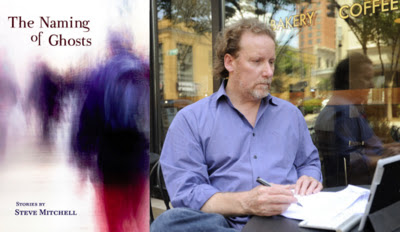 Camino Bakery in downtown Winston-Salem. Good coffee. Great pastries. Seating on the sidewalk. I can watch. Friday morning. Saturday morning. Late afternoons. A metal table in the angled shade of the building on the corner.

The table is small. Everything is pushed together. The china cup, the keyboard, a fluttering page of scrawled notes. The shadow of a story. A place to begin.

There are other restaurants further down the block. Traffic grunts past. The stoplight blinks. Sometimes the sidewalks are crowded with dogs and their owners, families and couples or teenaged girls walking three abreast. I can watch. Sometimes an innocent crash or a surprised shout pulls me from the work; I blink for an instant, disoriented. Sometimes the street vanishes altogether.

The world around me opens up, or closes down; it's difficult to say which. One moment I'm relishing my condition as an unrepentant voyeur, watching everyone, everything. The next, I'm diving upward into a still pool where there is silence and coolness and only a whisper of self.

It has the aspect of a mountaintop, this inner location. It has the visceral trace of a clearer air and a breaking view, as well as the sense that time is falling behind me, its knotted path forgotten in the same way it's said we cannot truly remember pain.

A dog barks. One day I hear it as a distant voice. On another, it pulls me back into the street where I look up to find a woman frowning into her phone or three guys laughing, red-faced and sputtering, over their beers.

There's some kind of fertile space here. It shimmers between the inner silence and the jangle of the world like convection waves rising from a summer road. The passing music and the low rumble of trucks, chairs scraping the sidewalk and white china cups on black tables.

At the next restaurant, a man and a woman. There's the slight tilt of her head as she turns away from him to her menu. It's a gesture that might mean "I love you uncontrollably" or, just as easily, "I can't wait for this evening to end." His hand hangs open at his hip. In a moment he might take hers.

I fade. Words forming pictures, pictures becoming words, they take my place. They slide over each other, their light bodies rippling.

I vanish, into the space just before words. The opening into which something is said.

The sun passes behind a high cloud and a border of shadow eases up the block, leaving the air cool and damp in its wake.

Camino Bakery. I'm here on the sidewalk, I think. I can see my reflection in the window at my side. I'm holding my glasses in one extended hand. I'm staring forward, arrested by some thought I have no hold on.

A little boy wanders from his parents' table. He can't be more than three. Sandy hair. Red t-shirt. I can watch. His body shudders in a kind of loose joy, short fingers running over the table tops and the backs of chairs.

He stops to look at me. At the edge of the table he stares up to me. He stands completely still, his face innocent and fearless. I snap into my body with a sudden twitch of wonder.

That's what I want a story to accomplish.
Posted by The Story Prize at 9:21 PM