Josie Sigler and the Proverbial Needle

In the 17th in a series of posts on 2012 short story collections entered for The Story Prize, Josie Sigler, author of The Galaxie and Other Rides (Livingston Press), explains how she keeps at it. 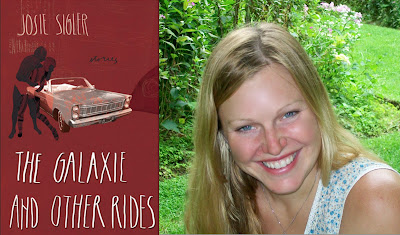 I don’t know that becoming a writer was a choice, initially. I just was a writer. I remember the first time I read a book by myself. The book was called Tommy’s Train. I read it aloud to my brother in my grandmother’s musty basement in Downriver Detroit. I couldn’t have been older than three or four, but I got the feeling I would later come to recognize as a story developing: What’s my train story? I was about to take my first train ride, from Detroit to Kansas City. I could imagine my family on the train although it hadn’t happened yet. That was probably  the first time I realized that you could have a story without having been there. Aha! Fiction. I also remember writing poems on a regular basis as early as nine years old, and I made a commitment to daily writing when I was eleven or twelve, in the seventh grade. So becoming a writer happened very early for me.

Staying a writer is something I do every day (or night) when I sit down to write. It’s not too hard for me to get myself to the table—even when it doesn’t go well, I like the mess and puzzle of writing. Developing my skills as a writer was and is largely a matter of reading books that amaze me, and figuring out how they amaze me. There’s an actual physical sensation I get when I read something that will change me forever; it’s like a shrinking feeling in my lungs that spreads to my upper back. It sounds corny, but it feels a little like wings sprouting. Later, when I am writing, and a good impulse comes to me, I get the same feeling. Then, if I’m lucky, my brain and fingers will remember that how I’ve learned from other writers and modify it to suit my purposes.

I’m pretty fascinated by the creative impulse—that gorgeous nanosecond in which the part of inspiration that surfaces is still linked to the part that remains subterranean but you’re already typing or scrawling. In her foreword to Song of Solomon, Toni Morrison says she used to regard “the ‘mystery’ of creativity […] a shield erected by artists to avoid articulating, analyzing, or even knowing the details of their creative process—for fear it would fade away.” However, in writing that novel, she came to feel that her father, who had passed, was answering the book’s central questions. She began to trust the mystery. For me the space where intellect and experience meets up with mystery is an incredibly productive estuary. I have dedicated a lot of my life’s hours to building snappy sentences, but I have also tried to continually hone my instinct for recognizing the glint of the proverbial needle of a smashing idea in a big crazy haystack of a world.

Generally, this means my notebooks and task manager are jammed with hundreds of projects in various stages of development. It’s a rare day if I don’t have a “jottable” idea. (Then, maybe there are no bad story ideas and it’s all in the execution.) My main obstacle is the feeling of dejection I get when I realize I’m not going to live forever, and I can’t write all the time—I have to go to the dentist, do dishes, chop wood. I try to stick with a single project through the flow, to trust that I can always come back to a good idea later. I will sometimes write a note to myself: “If it’s a good idea now, it will probably be a good one six months from now, too.” Other times, I have to follow my impulse, and I just know it. Aimee Bender gave me some lovely advice once, which was to follow the pleasure in writing. That advice has served me very well because it goes perfectly with the only rule that always works for me, which is “just keep writing.”