April Ayers Lawson on Why She Writes

In the 39th in a series of posts on 2016 books entered for The Story Prize, April Ayers Lawson, author of Virgin and Other Stories (Farrar, Straus and Giroux), explores what motivates her. 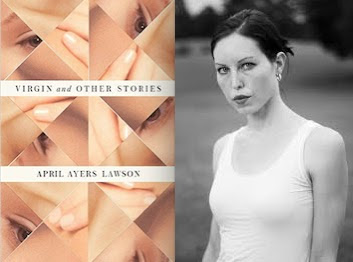 Over the years I have often asked myself why I write, and to be honest in answering this question publicly is hard because it means admitting I Don’t Know. But I have theories and the two that together form an answer are as follows.

The first—which will probably sound terribly unromantic—is that I write out of compulsion. As a kid I began to feel the urge to make stuff, which first manifested with visual art and inventions, and when I was in my late twenties this compulsion to make things turned almost completely to writing. When I go for a while without making stuff, there’s the feeling that I should be, and sometimes a feeling of pressure in my head, of disorder, and of not being able to think clearly enough. I do still draw, but it’s mostly doodling complicated abstracts—on the corners of papers, on lesson plans for teaching, on envelopes, on disposable restaurant menus meant for kids to color on, whatever is around. In the sense I work on them until something clicks, until they feel complete and I feel right in response to them, you could call them mandalas. Sometimes I don’t even know I’m doing it until I’ve already started. Each mark I put down requires for the sake of balance another, and so on, and I’ve figured out that the way a story grows for me is a lot like this. That the stories are types of mandalas. I suspect the basic urge to be at least in part fueled by inner restlessness, anxiety, and an excess of emotion. Also, I’ve noticed that the sense of compulsion waxes and wanes; that I go through phases of feeling it intensely and then barely at all for months.

The second is that I use writing to get in touch with a place that would otherwise be out of reach. It’s not usually easy to get to. When I’m in that place, what comes out onto the page surprises me even as it seems inevitable. And when for some reason I don’t write for a while, I sometimes in my mind see the image of a blocked window—like the air and light that’s supposed to be getting in isn’t getting in and one part of me is saying to another, Why are you keeping this window that’s supposed to be open closed? Why are you cutting off the life?
Posted by The Story Prize at 10:00 AM