Brian Booker on Taking Characters for a Ride

In the 34th in a series of posts on 2016 books entered for The Story Prize, Brian Booker, author of Are You Here for What I'm Here For? (Bellevue Literary Press), lays out an effective story strategy: putting your characters in a car. 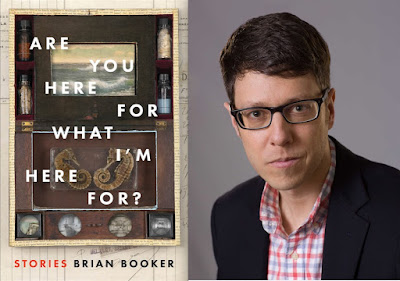 Sometimes when my story draft is running low on gas, I try to persuade my character to get in a car and go. My characters find themselves getting picked up and taken for a ride, or being asked for one, or taking a wrong turn in middle of the night.

A car trip gives intention (conscious or otherwise) a trajectory in the world, and the world has many ways of interfering with it. It does so with gruesome fatedness in Flannery O’Connor’s “A Good Man Is Hard to Find,” which has plenty of suspense even though the opening paragraph announces where the story is headed: The Misfit, escape from the Federal Pen, headed to Florida (where the family is also headed). It’s a masterpiece of pacing: The path from beginning to end is not a straight line, and in order to stay the fated course, the family must go off course, which they do “outside of Toombsboro,” when the grandmother “recalled an old plantation that she had visited in this neighborhood once when she was a young lady.” It’s a particular type of lostness, both in place and in time, in which the discrepancy between the map (the grandmother’s memory/desire) and the terrain (the dirt road down which the family’s car races in a swirl of pink dust) generates a dislocated worry before driving the story into the promised horror. It’s hard to imagine that working so neatly in the age of GPS.

Especially in America, the car is a metonym for the body and ego. It’s an escape pod that ushers you through an indifferent or hostile landscape, a mechanical being that, like the body, can falter and fail and die without warning. In Annie Proulx’s folktale “The Half-Skinned Steer,” the octogenarian businessman Mero is driving his Cadillac (he’s afraid to fly) from Massachusetts back to the Wyoming ranch whose depredations he fled sixty years earlier. The plot is designed to funnel old Mero into the traps set by memory and the high desert landscape, where the smallest mistakes have the direst consequence, until he finds himself alone and unsheltered in terra malcognita, “the cliffs rearing at the moon, the snow smoking off the prairie like steam.” The car is a little world, but the world outside is bigger.

The interest of car trips has something to do with the ontologically ambiguous position of the person in transit, who is here but not really here, who is on her way somewhere else.  In Joy Williams’ story “The Little Winter,” from her collection Escapes, a terminally-ill woman named Gloria travels to visit her old friend Jean and Jean’s daughter Gwendal. Gwendal, who is disconcertingly precocious, offers to write Gloria’s biography; she asks if Gloria will kidnap her. Gloria accepts the offer, picking up the girl in the middle of the night. Not until the two have set off on a strange kind of road trip to nowhere, staying in motels like stations in a bardo, do we realize the extent to which Gloria’s mind is unraveling—either that or Gwendal is a demonic figure, an emissary from Death riding shotgun.

There are different shades of kidnapping; car stories can generate suspense from the unstable balance of power between driver and passenger. If a good craft tip is to have your character pick up the person they shouldn’t, another is to have the wrong character get behind the wheel.  That’s what happens in the last section of Edward P. Jones’ story “The Sunday Following Mother’s Day.” Madeleine hasn’t seen her father for thirty years since he went to prison for murder. He shows up at her door as she’s preparing to go visit her son at the state asylum. The father offers to go with her, to drive Madeleine to the asylum in his car. She doesn’t need or want his help, but as if in a kind of dream, she consents. Wrong driver, wrong car—that’s what swerves the story onto its marvelously uncanny track.

I am glad that soon cars will be smart and drive themselves. They won’t kill us as much, or let us kill each other and the planet so easily, which is good. They will buffer us from the consequences of our erratic emotions and feeble attention. But something will have been lost for fiction, just as it was when the cell phone made it harder to get characters incommunicado, and thus to get them out of their depth or beyond the pale, at least geographically speaking.
Posted by The Story Prize at 8:51 AM