In the 38th in a series of posts on 2016 books entered for The Story Prize, Sara Majka, author of Cities I’ve Never Lived In (A Public Space/Graywolf Press), discusses the importance of having time to fail. 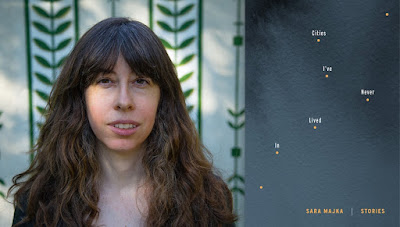 Around this time last year, I had a baby, and though I’ve tried to read and write since then, mostly the year passed without writing. So lately I’ve been thinking about how to start writing again, and I feel tentative about it and also have that sense that so often happens—that I’ve lost the ability to write, that I’ll try and find that I won’t be able to do it anymore.

I remember once reading that if you’re stuck in your work, then it’s best to read, read something good, and soon enough, you’ll find yourself writing again. This advice seems more geared for the short time block, but I do think reading may be the most important step. When I’m not reading, my acceptance of sloppiness of thought grows—things can start seeming fine enough. Another thing that I’ve done in the past is to journal. I wrote in diaries when I was young, and it used to be a way to return to basics to start again, but I find that I do it less and less. I’m not sure why.

I also think about my ex-husband, who was a mathematician, saying how when you’re a young mathematician, it’s best to put a lot of time into your work, so that many projects are laid out for you for the future. That reminds me of the time when I was a fellow at the Fine Arts Work Center in Provincetown. I was a fellow for seven months and nothing I wrote was very good, but I did produce a lot of it. I had stacks of printed pages on my desk. I don’t think I ever even reread that work, but its usefulness was that—during the time I spent writing it—I was actively creating an imaginary world, one I could return to later and write from. I imagine it as sort of pushing out space in my head—excavating it, or tunneling as one might tunnel mines, or laying down the tracks. It takes a lot of time, but those months of inner time could be used for years to come.

With the baby now, I don’t have that time anymore. I feel unsure how to get started again. In the past I would lie around and read, read for long hours, read lazily, read because there was nothing else to do, and slowly begin to pick at writing until I found that metronome of working again. I would then write badly until I’d written so much that a little bit could be salvaged from it, and then that little bit could grow into its own thing. One of the hardest parts about writing when you’re pressed for time is that it’s the least efficient thing in the world—I think of our electrical grid as I write this, where such a small amount of the electricity that’s created actually goes into lighting the bulb that I am writing this by.

Now that the baby is older, I could find time to write, but it would be hard to find time for all that failed writing. For me writing begins in earnest when I allow myself nothingness: allow that nothing will come out of it, that I’m moving toward nothing, that I’m gaining nothing—when I’m in full embrace of its futility, which is a way of saying when I’m able to release control. It’s a daunting practice, but certainly the most daunting part is the beginning, when you know that not today, not tomorrow, not even the day after that will you be able to write anything good.
Posted by The Story Prize at 9:30 AM