Maureen Millea Smith on the Lasting Influence of Libraries

In the 36th in a series of posts on 2016 books entered for The Story Prize, Maureen Millea Smith Oldshue, author of The Enigma of Iris Murphy (Livingston Press), on how her path to being a writer started in a library. 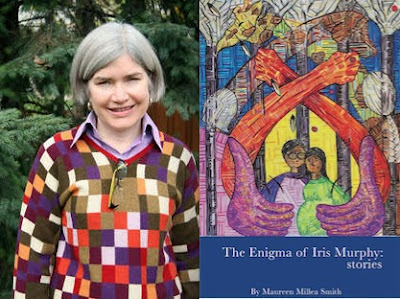 When I was a grade school aged child in Omaha, my father would take my siblings and me to the Old Main Library on Saturdays where Miss Adeline Proux of the Children’s Room would help us pick out books. On average my father took three children at a time on these trips. If we did not go on Saturday he would take us there on Wednesday evening, going first to the Fontenelle Park duck pond to feed stale bread to the waterfowl, and then onto the library. My mother would be at home, often blessedly alone, cooking dinner.

My parents lost two children. My younger brother was born with Down syndrome, and died at four months of age from pneumonia. Six years later my older sister, who was eleven, died of glomerulonephritis. The library routine was part of their pattern of keeping their five remaining children busy and engaged. Ice skating, gymnastics, summer school, piano lessons, baseball, my parents found things for us to do. We soldiered on.

The visits to the library were wonderful for me. Reading was my solace in a time of upheaval; it still is. Miss Proulx and her staff gave extraordinary readers’ advice. I became a fiction addict and a student of the story. The public library nursed my soul. Novels that depicted the inner workings of a character’s mind taught me about humanity. Books educated me to the mysteries that exist beyond Nebraska.

In college, I became an English major because I liked to read and I liked to write essays. When I received a hideous score on the LSAT in 1980, I felt doomed. In my day, all English majors said they were going to law school; parents liked those words.

After my LSAT debacle, I remembered what a librarian named Margaret Marrs had told me when I was a page at the Omaha Public Library:

“You should go to the University of Iowa and get your MLS. You would be a great librarian.”

When I told my advisor at the University of Wyoming, Professor Janice Harris, that I would like to be a librarian, she also believed that it would be a fine path for me. My mother was appalled when she heard about library school, certain, I am sure, that I would live a life of dire poverty, unmarried, in a hovel. Upon arriving in Iowa City I dutifully took my courses and learned all about cataloguing and reference, library boards and intellectual freedom, and met the man who would become my husband.

What became my private obsession at the University of Iowa was the Iowa Writers’ Workshop. Studying library science became my cover for wanting to become a writer. I knew more than anything else, even then, that I wanted to write fiction. I understood that if my mother ever learned that I wanted to be a writer she would jump into the family Ford and drive Interstate 80 to Iowa City to set me straight. Mom catalogued writers under “starving artists” and “adult children who live with their parents forever.” I kept this dream under wraps.

My husband’s career took me to Ohio where I would work seven years in the Fiction & Young Adult Department for the Public Library of Cincinnati and Hamilton County. Later we moved to the Twin Cities where I would go to night school for an MFA in creative writing at Hamline University. In the age of memoir, I was dedicated to fiction.

My characters open their worlds to me. They are more than me. They make me excavate the facts of their lives. They demand do-overs, re-writes, renovation, compression, and revision when it comes to their stories. They surprise me endlessly, turning my plotlines into dust. Whenever I open my laptop and begin to read a current story or chapter aloud, that incantatory process of getting back into a character’s life, I leave mine behind. Most of the time this is good.

Once though, when I was having what human resource professionals love to call “work/life stress/balance issues,” I said to a particular character,

“What if today I just wrote about me?”

Silence came over that corner of my bedroom.

My cat looked up from her place on the bed, warily.

“But I have the better story,” he said back to me.

My characters are not my imaginary friends.

I sighed, wept a little, and got on with his life.
Posted by The Story Prize at 10:00 AM