Charley Henley on How Boredom Can Spur Creativity

In the 43rd in a series of posts on 2016 books entered for The Story Prize, Charley Henley, author of The Deep Code (China Grove Press), talks about working in a food processing plant and spending a night in the drunk tank. 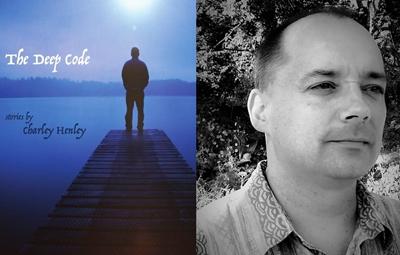 When I was an undergraduate at the University of Montana I worked for a couple of summers at this Birdseye corn processing plant in Waseca, Minnesota. The job paid $4.50 an hour, but it was a hundred hours a week. So, sixty of those hours were at $6.75. A lot of money in those days. And I was very happy to get it. Like many industrial operations, the corn plant was basically a long winding conveyor belt that took raw product dumped off the truck and turned it into processed packages of cobs and cut corn. These were boxed and stacked in a warehouse freezer reminiscent of the last images of Indiana Jones and the Raiders of the Lost Ark. I worked every position along the conveyor. I worked the muddy huskers, full of dead critters and corn smut. I worked in the hypnotic drone of the cob select stations. And I worked on the sanitation crews, where we fought a never-ending battle against mold with chlorine and nitric acid. My favorite job in the whole place was running the blanchers, two gargantuan machines that parboiled the fresh cobs. But to me they looked like a pair of warp engines off a trap freighter, taking the spinward run out to Ceres and the asteroid fields.

All down the sides of the blanchers there were these heavy valves, and it was my job to regulate the temperatures in the machines, loosening and tightening the valves with an industrial wrench. Then I had to record everything in a log book. It was loud as hell in that plant. And we wore ear muffs, flex coveralls, and thick rubber gloves. It left us isolated. Sensory deprived. We’d go twelve, fourteen hours a day. Week after week. Nothing to do but rattle around in your own brain. There was this other guy who I took turns with, working the blanchers. I don’t remember his name now. Or who started it. But in the margins of the log book, we began to write a story. Back and forth. One sentence at a time. It was about a drug runner and a soldier of fortune down in Central America named Nick Danger – no relation to Carlos. And I suppose it was probably pretty stupid, right? But Nick Danger got me through those hours of monotony. He’ll never appear in hardback, of course. But, I’d like to think that the Birdseye Company is meticulous in their record keeping. I’d like to think that ensconced somewhere in some bunker beneath a corn field in Minnesota, there’s Nick Danger. He’s still on the phone at Guatel, screaming at his man in Miami, who has hung him out to dry.

I spent a night in the Tuscaloosa County lockup one time. Stumbling out of Egan’s, I’d gotten picked up for walking drunk. And I remember waking up in the wee hours of the morning, surrounded by all the other drunks. My head on this jailhouse Bible. It was really nice of them, I think, to give us a Bible. Anything, really. Something to read in the sheer boredom of the pink walls. I don’t recommend spending a night in jail. But the truth is, I got a story out of that night called "Satellite Mother." And unlike The Adventures of Nick Danger, this one got published. It’s out there in the world for anyone to read. That’s about all an author can ask of a story. So, in the whole mix of this grand thing, I do not think that I would want to have spent that night any other way. It has become one of the best nights of my life. Though it was absolutely the most boring. This is the thing: Boredom is your friend. Without boredom, you will never write. Do not be afraid of the boredom. Earlier that night in Egan’s, I had not been bored. But I was not writing in Egan’s. I was running away from writing.

The other day my son told me that I should’ve been a truck driver. He may be right about that. I used to ride the Greyhound a lot. I’ve ridden cross country more times than I can count. The monotony of it can drive you mad, especially in the dead winter across North Dakota. My head would struggle at first against the boredom. But after the first day, I’d fall into the zone. Voices would rise out of the engine, the pavement. Images streaked across the fields. Today I have a job that I love. I teach creative writing and literature to undergraduates, many of whom are as amazed by the power of literature as I am. I’m very lucky to be able to do what I do. But I can imagine other jobs. Out on the road, I always come up with the solutions I need to these fictional problems and puzzles. Perhaps, if I were a long-haul trucker, I would write them down in the sleeping compartment of my rig after a long day’s drive. But if I were a child today, I do not think that I would want to be a truck driver. Instead, I would hope to become an asteroid miner. Imagine the wonderful boredom of it. Alone for weeks in the inky blackness of deep space. Nothing but a set of log books that no one will ever read.
Posted by The Story Prize at 9:30 AM