Callan Wink on Work and Legitimacy

In the 50th in a series of posts on 2016 books entered for The Story Prize, Callan Wink, author of Dog Run Moon (Dial Press), takes us on a fishing expedition. 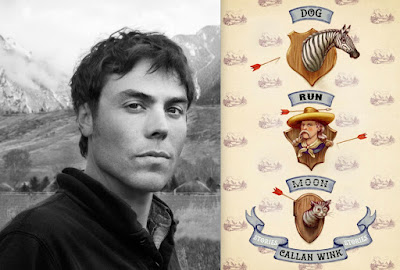 I think many writers, whether they admit it or not, spend a fair amount of time trying to ascertain their own legitimacy as "writers." There are some semi-standard benchmarks: getting a story published, getting a book published, getting a good review, getting many good reviews, on and on, culminating in thoughts about one’s own legacy, or body of work. Possibly, when a certain level of achievement has been realized, these thoughts finally recede, I don’t know, I’m definitely not there. Personally, however, my thoughts regarding legitimacy often dip one step deeper and ponder the bottom-line worth of the whole endeavor.

Maybe it has to do with my firmly Midwestern upbringing and current small-town western existence. There is a real, if vague, sort of distrust one faces from rural communities if he/she decides, for some unfathomable reason, to spend the greater portion of a nice day inside, thinking, sitting. Doing…what, exactly? A person of able body, especially a man, should engage in real work on a daily basis. Preferably, work that takes place out of doors, after a day of which one can see tangible proof of his efforts. Those who choose inside jobs—lawyers, bankers, real estate agents, priests and professors—are viewed through narrowed eyes. Potential shirkers all. Can work that leaves one’s hands soft really be called work? Quite possibly this is a silly question to ask in our current tech and knowledge based economy, still, it’s a thought I wrestle with when I stoop over my keyboard and waste another perfectly good day plunking away.

I reconcile this inherited worldview by only partially donning the authorial mantle in the first place. For half the year I continue to engage myself in an occupation in which sweat, sunburns, and pulled muscles feature rather prominently. For the past decade I’ve spent the majority of the temperate months rowing fly-fisherman down rivers in Montana. Fishing guiding is a job that has almost no relation to writing and that, in part, is why I value it. I sometimes joke that to be a successful fishing guide all one needs is a strong back and a weak mind. While that’s not entirely true, there is an element of mindless manual labor that I find myself missing after a winter spent chained to the writing desk. Being outside and in the world, being physically exhausted after a day on the water—these are things I would miss greatly if I were to ever stop fishing guiding, but, more importantly, I enjoy the sense of self-identity that stems from having the job. Most of my friends are fishing guides, and, after a hard day in the late summer, we go to the bar to grouse about the heat, about difficult clients, about the wind. Complaining about your job with your co-workers is the birthright of the working class, something that solitary fiction writers don’t often get to do. (At least those of use who don’t live in Brooklyn.) In fact, on a more general level, talking to other writers, especially about writing, is not something I’m incredibly good at or even inclined to do in the first place. Over the years I’ve been fortunate enough to spend time in the presence of several writers I greatly admire, and, for whatever reason, it seems that we end up talking about fishing, the weather, dogs—anything but writing.

At this point, when people ask me what I do for work, I can either tell them that I’m a fly-fishing guide or a writer. Each of these answers gets a different response, and, at least in my local environs, the fly-fishing guide response is still the one I like best. That being said, the thing inside me that compels me to write is the same thing that ensures I’ll never be perfectly happy strictly floating rivers. It’s the thing that sets me slightly apart, in a not entirely good way, from many of the other fishing guides I know—the knowledge that I have some other gig that helps pay the bills. To some, this paints me as a mere dabbler, the sort of fishing guide that has a trust fund or a spouse with a law practice. I disappear in the winter and do some rather incomprehensible inside job that doesn’t involve fishing and thus I’m slightly suspect. And conversely, during the long days of summer when boats and fish and rivers consume my life, I know many other, more successful, "real" writers are toiling diligently. I feel the weight of work undone, the guilt seems to radiate from my neglected laptop itself.

Legitimacy—most likely it only stems from pure devotion to one’s craft. Quite possibly, at some point one of the jobs is going to have to make way for the other if I hope to reach a higher level of performance. But, at this point, I try to enjoy the dichotomy of my year. There’s a season for writing and a season for fishing and at the end of each I’m looking forward to the other.
Posted by The Story Prize at 9:30 AM