In the 59th in a series of posts on 2016 books entered for The Story Prize, Charlotte Holmes, author of The Grass Labyrinth (BkMkPress), contemplates misses, near misses, and non-misses. 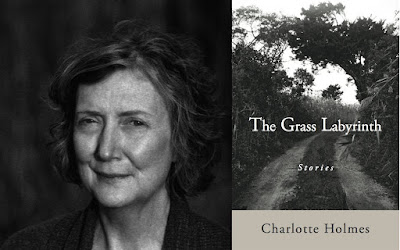 Women’s shoes come in whole and half sizes from five to nine, but manufacturers often leap from nine directly to ten. The “heart size” for most shoe manufacturers—where they do most of their trade—falls between seven and nine, but ten is the afterthought, still a standard size. Nine and a half is not. For someone who wears a 9.5, nine is too short and ten is a boat. The slow pressure that deforms the hallux, the humiliation of losing a shoe while running for the train—size nine and a half women know these punishments because they’re three tenths of a centimeter from normal. Manufacturers must think this a negligible difference.

An editor at a literary magazine in New York, I’ve sent out galleys for the next issue, and now comes the tug-of-war over the copyeditor’s marks. A writer—my former teacher, winner of all the awards, hailed for his unstinting accuracy—telephones to go over his galleys. He’s chatty and comfortable, teasing. He’s asked me to sleep with him several times, and attributes my refusals to prudishness, not to lack of interest. When we get down to the serious business of the galleys, his voice hardens. “In the penultimate line, someone has changed the word to grandmother,” he says. “The cadence, the off-rhyme—grandfather is the word that should be there. Any fool can hear the difference. Grandfather was in the manuscript.” I have the manuscript on my desk. In the penultimate line, typed in the poet’s faded ribbon, grandmother winks back at me.

Over my desk in North Carolina, I tape an index card on which I have copied out a quotation from Caroline Gordon: "Find the exact word, not an approximate one." Caroline is one of my literary heroes. She keeps the magnolias at bay when she writes about the South, and for this, I love her and her books lined up on my shelf. Sometimes my poet husband and I fancy we’re like Caroline Gordon and Allen Tate—married writers under the same roof, toiling in academia. Because these are the early 1980s and no biographies of the two exist, we know few particulars of their lives. When we imagine ourselves like them, we don’t think of their violent quarrels over his infidelities, or their alcoholism, or the way they farmed out their daughter so they could write. We imagine them behind their typewriters all day, sipping a little wine and arguing books in the evening, doting on their only child, teaching classes brilliantly. We tell ourselves that if they did it, we can, too. All we must do is work very, very hard. Who knows how long it will take to make a life like theirs.

Only when I’ve lived in one place a long time do I understand the moon. After years of watching it rise in the same place above my backyard in Pennsylvania, I sense its constancy. The moon rises an hour later every night. When the moon is nearly full, it rises just after nine, and climbs to the tops of the blue spruce trees in the wooded lot behind our house. A little higher, and it silvers my next-door neighbor’s slate roof. This is particularly striking in winter, when the air is hard and still and the black bulk of the evergreens throws shadow onto the snow. The landscape’s rendered not in black and white, but in black and blue as moonlight burnishes the snow. Burnish doesn’t seem like the right word for snow, but this snow is full of light, and light burns. Burnish is the right word after all.

I listen to my mother on the phone, her garbled sentences urgent. She’s been dying for a long time, and though her words are unclear, I understand that she’s telling me I need to come to her now, right now. I imagine her bruised hands shaking as she clutches the phone, the oxygen tubes in her nose. My mother and I have always been close. She knows that, of all her children, I’m the one who won’t flake out. Every time she calls and says she needs me, I take a plane, rent a car, spend the time, spend money I don’t have to be with her. But a month ago, she accused me of unbelievable things, a conspiracy of almost comic proportions. If I hadn’t been so angry, so shocked, I might have laughed, might have figured out that her oxygen-starved mind was on the wane. I tell her that maybe someday she’ll realize I had no hand in her troubles. She answers, fluent in the language of aphasia. I tell her I love her and hang up, having a point to make. Three days after the last time we talk, she dies. Early the next morning—four o’clock—I sit in the dark in my freezing front room watching the Hunger Moon fall behind my neighbor’s house across the street. Snow covers the ground on my first day in the world without my mother in it.

I have one child, now the age my mother was when she bore me, the Jesus age, thirty-three. My son is an artist with an MFA, trying to make a living in America’s most expensive city. My mother, who never finished high school, was a housewife with three kids, trying to make ends meet on a red dirt road in Georgia. I’m their point of intersection. When she wounded him with a thoughtless remark, my mother tried to make amends by promising him my father’s things. When he was five, she let him touch the heavy ceremonial sword engraved with my father’s name. When he was ten, she allowed him to hold it. The last time they saw one another, she told him he could take the sword home. Twenty, already an art student, he seemed embarrassed that he’d ever longed for a military sword. For my mother, at least in this case, time didn’t calibrate desire.

Centimeters divide the right from the almost to the never-possible. I want to be able to rely on precision, on accuracy, to incise life into words that find its patterns. If I’m lucky, a story travels the distance, whether step by step or by leaping.
Posted by The Story Prize at 10:00 AM