In the 65th in a series of posts on 2016 books entered for The Story Prize, Theodore Wheeler, author of Bad Faith (Queen's Ferry Press), reexamines his story collection in light of recent events. 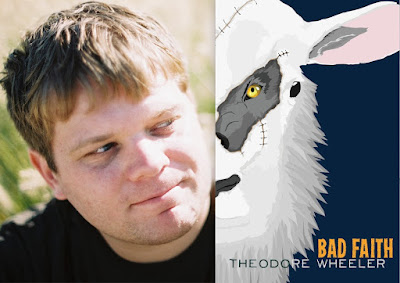 As part of my literary citizenship here in Omaha, I co-host a literature-themed pub quiz at a Midtown nightspot called Pageturners Lounge. It’s a good chance to come together with friends and hear various folks from the community who we invite to talk about their books or small press or the local library. Our event in November fell the day after the election, something that seemed fortuitous at first. Who wouldn’t want to put all that nastiness behind them and tilt a few pints in honor of the nation (hopefully) going on about its business in a quiet and dignified manner? Or not.

Being good citizens, we showed up ready to give our best to the event, though the proceedings were decidedly low-energy. Only about a fifth of our typical crowd showed, and half the teams featured the word “sad” in their usually-cheeky team names. (For example, Big Trouble in Little Vagina was a crowd favorite the previous month). Safe to say, it wasn’t our best night. However, given the small crowd, the occasion did allow for reflection and conversation.

As it happened, that particular Wednesday turned out to be much more roiling than many of us expected. Only about a fifth of our typical crowd showed, and half the teams featured the word “sad” in their usually-cheeky team names. (For example, Big Trouble in Little Vagina was a crowd favorite the previous month). Safe to say, it wasn’t our best night. However, the occasion did allow for reflection and conversation.

At some point in the night, one of my compatriots noted that Bad Faith, my short story collection, could be billed as an exploration of “Trump’s America.” To many, the phrase must provoke an image of unemployed white men whose political views center on xenophobia. That’s definitely not how I see myself—I’m employed! I don’t shout hate speech!—but now that Trump had won, would it mean that all the U.S. was Trump’s America? And, in a more personal way, have I always been writing from this place and about these people, however you want to label them? Would that also change now that the presidency might go in unprecedented directions?

In some ways I could see where my friend was coming from. Many of my stories feature rural, rough-edged types who fill the outline of a Trump voter that’s been iterated in the media. My fiction has fit under other labels in the past—rural noir, prairie gothic, dirty realism, etc.—all both dissatisfying and appropriate. Given that I spent years with these characters, digging deep to reveal and refine their natures to the core, I tend to resist thinking about them in demographic terms. On the other hand, with all the talk of recounts and Electoral College shenanigans, maybe it’s worthwhile to think about my characters in this way too, even with the book out. Times change, so why shouldn’t the way I see my book change, too?

Going off my friend’s suggestion, I began to think about who fit into what electoral bucket. Certainly the crotchety Harry Kleinhardt of my opening story, a man who’s forced to face his disappointment of a son while dying from cancer, who spends his afternoons sunning himself in the mudroom listening to Limbaugh and reminisces about how bright life once was, at least before it all went to shit. There’s one vanguard of Trump’s America. Then there’s Anna from “Impertinent, Triumphant,” who met her politician husband while both were congressional interns for Kit Bond, the former Republican Senator from Missouri. It’s easy to see how Anna would coalesce behind the Trump campaign. While not a “build that wall” kind of gal, she wouldn’t be opposed to chanting “lock her up” if others were doing so, say, on the floor of the Republican National Convention, exchanging a loftier political ideal or two in order to take a pantsuit-wearing liberal down a peg.

But there’s some noise in the populous of Bad Faith—as with anywhere, the distance between perception and reality isn’t so clear. Sam and Jacq, also from “Impertinent,” a former travel entrepreneur and an experimental landscape artist, leave Manhattan to settle on a ranch near the Sandhills. And what about the biracial man from Omaha who has to face his fear of being an outsider in a small town (and being exposed to small town police) to attend the funeral of his estranged white mother?

Tallying my characters’ likely votes, I found the Bad Faith results to be remarkably similar to those from November 8. Trump won by a margin of 50%-38% among my characters, compared to his 60%-34% margin in Nebraska this year. About 30% of my characters wouldn’t vote at all, which nearly exactly hits the 29% of Nebraskans who didn’t vote. If the statistics are to be believed, I was writing from inside Trump’s America all along— the only slight error being a 10% underestimate of the president-elect’s support here.


The numbers themselves don’t matter so much, of course. The calculus is too complex for either statistical example to hold much worth beyond the referential. In the end, it’s Nate Silver’s job to make sense of the macro; it’s the fiction writer’s job, in particular an author of short stories, to dissect the micro. While some characters in Bad Faith fit the stereotypical Trump voter, nearly as many in the aggregate flee from deep-red counties or are unaffiliated misfits who live in ways that are beyond a pollster’s imagination. I don’t know if that makes me a chronicler of Trump’s America. But maybe it offers some evidence that the culmination of microscopic details do in the end form a clearer portrait of a certain place in a certain time.
Posted by The Story Prize at 10:21 AM