Sara Schaff on Art for Our Sake

In the 55th in a series of posts on 2016 books entered for The Story Prize, Sara Schaff, author of Say Something Nice About Me (Augury Books), grapples with engagement. 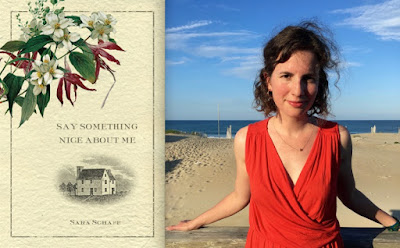 Years ago in Ann Arbor, when I was in graduate school and the great Shaman Drum Bookshop was still open on State Street, a local guy seemed to appear at every reading and harass the writers: Didn't they think they had a responsibility as artists in the face of the current political climate? At least, this was the question as I remember it, and I also remember bristling at his scolding tone. The writers he scolded seemed to bristle, too. They tended to defend art for art's sake, not art in service of some larger idea.

The political climate then was the one under George W. Bush, a President I railed against over drinks with friends, but not in my writing. And if the man at Shaman Drum had asked me why not, I would have defended my right to write whatever the hell I wanted.

The truth is I didn't know what the hell I wanted to write. I had to find my content by trial and error, not any measure of control. Many of the stories I wrote at the University of Michigan were useful practice but poor examples of art (for any sake). I threw most of them away. Which didn't make me feel any better. After graduating, I taught for two semesters, then received the same layoff notice as a few of my colleagues. The blow felt personal. I was struggling as a writer, but I had seen myself as a teacher for years.

I went on unemployment. I looked for work that was different than the work I had always expected to do. Suddenly I had a lot to write about. Financial insecurity, creative failure, old parental issues I had not yet faced.

I was lucky though: after several months I got a part time job at an art museum, then a full-time one at an advertising agency. Obama was President now, and I never railed against Obama. I didn't write about him either. I loved Obama. I loved my copywriting job. I could write in my cubicle, and as long as I got my copywriting work done, nobody bothered me.

I finished my first book that way, while unemployed and then while employed at a job I loved a little less as time went on. I was no Peggy Olson, but I met a couple of guys who thought they were Don Draper. My daughter was born, I quit my job, I found an agent, and my book didn't sell. I felt artistic despair, I went back to teaching, and I became the breadwinner of my family—another thing I'd not expected would happen, and which caused all other kinds of anxieties.

Still, I did not think I was writing about "the current political climate." Even during the 2016 campaign when I often went to bed with my heart racing. I wrote about other things and waited for the election to be over.

And then it was. That week in my beginning fiction class, we were "bending the rules of the universe," the name I give to our unit on speculative fiction, a week that is usually fun but which gave one of my students complete writers' block: "I was trying to write about a world in which it was impossible for Donald Trump to win. And then he won." She couldn't finish the story.

I knew where she was coming from. Everything I had been writing before the election now seemed inadequate. I stared at the novel-in-progress and a story, and new scenes didn't come. It's possible to bend the rules too far. What do you write when there are no rules?

Toni Morrison says this is exactly when we get to work, and since I shared her wisdom with my students, I couldn't let myself off the hook; I got to work: Letters to my representatives. A new story, essays. Notes for organizing the way the damn Tea Party organized in the years when I wasn't writing about politics.

This writing has kept me from sinking into despair, which Morrison also says there is no room for in crisis.

When I think of the Shaman Drum scolder now, I imagine what he was asking was whether we fiction writers took our work lightly. Even as a grad student I would have said no! Of course I took my work seriously—a fact I could prove because of how much I cried from the stress of it all. That wasn't commitment though. That was ego.

While I suspect that guy wasn't, in truth, trying to start a conversation so much as an argument, I'll still look for him in the audience when I do a reading from my first book. Go ahead, ask me, I'll be thinking. I'm ready to hear it.
Posted by The Story Prize at 10:00 AM