In the 47th in a series of posts on 2016 books entered for The Story Prize, Patricia D. Benke, author of Qudeen the Magnificent (Outskirts Press), explains why she thinks it's all part of the process. 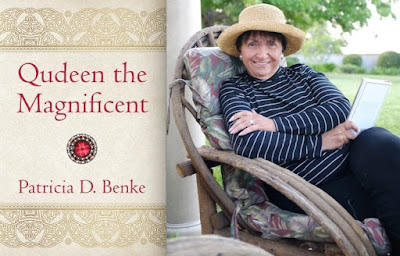 The dictionary defines writing as the activity or skill of marking coherent words on paper and composing text. If you accept this terminology as explaining writing as foremost a physical process, then yes, you might say you have writer's block if you cannot get your hand to move and produce the words you are looking for. Writing though is something more complex. I believe it happens before, after, and while one marks paper with words.

For example, if you cannot find the right words to describe maple leaves falling go find maple trees and watch their leaves fall. Something inside you might expand your feelings and change the selection of words when you return to the pen and paper. You have been writing.

Writing likewise happens when you set aside attempts to describe the maple leaves and wait for your mind to organize on its own what’s in there waiting to emerge, which may happen while you are looking at lettuce in the grocery store.

Intense editing of what you’ve already written about the maple leaves is writing. Did you describe the colors and movement in just the way you want? Maybe the description of maple leaves needs to percolate for a while as you put the words aside and move somewhere else in the story, then come back. If you don’t come back, maybe it doesn’t belong. Maybe you want elm trees. Save it and move on.

Given a definition of writing that combines concrete technical skill and the more ethereal notions about where writing comes from, and how or when it may emerge, I subscribe to what others may think a startling idea: There is no such thing as writer's block.

It took me about eight years to come to this.

In 2008 I began writing what I just knew would become a masterpiece that traced the life of a young Arabic girl and the assimilation of her generation. My trusted friends and agent enthusiastically embraced the concept of the proposed book. But they viewed my rapidly growing manuscript much differently than I saw it. One prescient observer noted, "It starts and stops and starts and stops.” In my heart I knew the comment held a kernel of truth because my Prelude, intended as a window to the central theme of the book, never matched what I was actually writing. I set the novel aside and lamented I'd lost my way. I picked it up again then set it aside. And lamented some more. I continued to struggle over words, sentences, direction.

A friend who knew me well and read every ideation of my saga, persisted in offering a different perspective: the omniscient voice was too limiting, too distant. What I was trying to say needed to be told in first person. I resisted. It would become too personal, too probing, too reflective of my own family, my own experiences, some of which were more painful than I was ready to admit. It would be about me. I didn't want it to be about me. There was my “block.” It was about me. It had nothing to do with what words I chose to set on the paper. It was about whether I was ready to write the truth.

Once I switched to first person, something kind of magical happened for me. The work fell into a series of short stories, each told in the first person by unrelated characters in different regions of the country. It had started and stopped because it was more than one voice, more than one girl speaking. From my saga I pulled the individual stories that I needed to create the bigger themes. While each story comprised the individual experience of a single girl, together they told the bigger story I promised in the Prelude: the creation of an immigrant soul and the corollary deconstruction of it. It became what I call a novella of short stories, something new for me.

So here's my conclusion. That agonizing eight-year struggle was actually part of the writing process. I would even argue it was necessary, important. I would never call that struggle some strange malady that someone invented; something called writer's block. If you come to accept your writing as the holistic process of creation as well as application of technical skill, you might choose to allow yourself the struggle and give up the moniker writer’s block. Call it something else.
Posted by The Story Prize at 9:30 AM