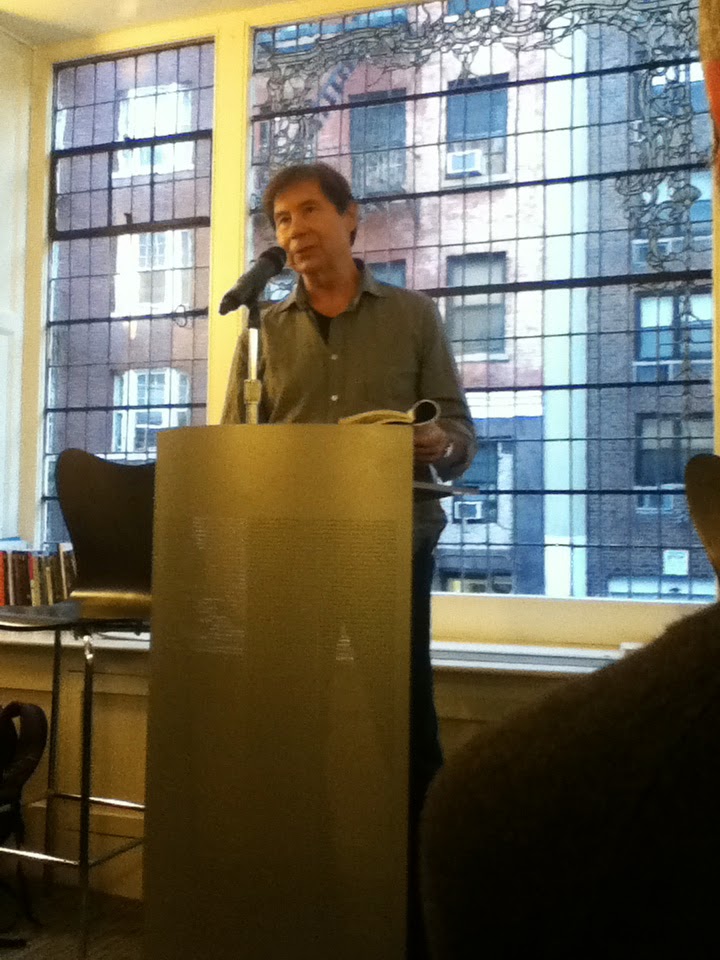 If Stuart Dybek wanted to read from, say, Apple’s terms of service agreement, or the instruction manual to my Heaven Fresh rice cooker, I’d probably listen—the man reads with a rolling, low-pitched gravitas that rivals Sam Elliott’s Big Lebowski monologues. But better yet, though, is Dybek reading Dybek, as he did last Friday at the NYU Creative Writing Program’s cozy Village townhouse. He shared the spotlight with poet Fady Joudah in the latest of NYU’s “New Salon: Writers in Conversation” series, introduced and moderated by Darin Strauss, author and NYU Writing Program instructor.


Dybek, when it was his turn to take to the podium, chose to read his short story, “Córdoba,” a selection that was silently cheered by at least one audience member (disclosure: this audience member) because it includes:
Those are some of the elements (presented in random order to prevent spoiling the uninitiated’s reading experience) that make up “Córdoba,” arguably the gem of Dybek’s collection, Ecstatic Cahoots, published by Farrar, Straus and Giroux this past summer. I say “arguably” because Ecstatic Cahoots contains forty-nine additional short stories, some as concise as two lines, others—like “Córdoba”—ten or so pages, all adding up to an embarrassingly large quantity of gems to sift through and discover. Oh, and add to those riches the nine stories from Paper Lantern, Dybek’s other collection (also published this summer, also by FSG). For those who’ve lost count, that’s fifty-nine Dybek stories. Enough to get Darin Strauss in a bit of trouble:

“It’s not every New York Times review that gets trimmed and twisted for over-enthusiasm. My last was.” That’s Strauss, relating his experience reviewing Dybek’s two collections. “For the first time in my years of occasional and by-in-large gentle reviewing, an editor blinked. ‘This is too much,’ she said.” Strauss went on to read a portion of his review as it existed pre-Times-editorial ax. A particularly lamentable casualty was the phrase, “jangling cinematography,” Strauss’s apt description for the narrative cartwheels and summersaults that make the experience of reading a Dybek story like that of reviewing a screenplay-adaptation of your latest, most pleasantly-bizarre dream.

“Córdoba” seems to contain all the characteristics of one such pleasantly-bizarre dream (refer to aforementioned randomized list) but with one important caveat: It really happened. When Dybek finished reading, Strauss asked him to discuss the influence of literature in the story (“Córdoba,” in addition to the García Lorca poem, also references Emily Dickenson and Chekhov) and Dybek, on his way to answering the question, made this pit stop: “I write basically two types of stories. There’s the stories that often start with an image, and I never know what’s going to happen with those, and there’s the story that’s actually happened. This story really happened.”

It took a moment for the significance of what he’d said to sink in. Then Strauss, along with many of us in the audience, did a kind of awkward choking, double-take, laughing thing. “That’s amazing,” Strauss said. “You actually drank with the Bears?”

Okay, so now it’s known that Stuart Dybek drank with the Chicago Bears, and that “Córdoba” is a true story. Which is astonishing for all the items in the randomized list but also for the way in which Dybek manages to portray the “jangling cinematography” of reality. It’s wild—in some ways wilder than if Dybek had invented the story from scratch.

Strauss continued the conversation by asking Dybek and Joudah about their relationship to “place” as it figures in their writing. Joudah, a Palestinian-American who spent portions of his childhood in Libya and Saudi Arabia, spoke of locating his work in the Middle East as well as in the American South, where he earned his medical degree.

Dybek, naturally, spoke of Chicago: Nearly all of the fifty-nine stories comprising Ecstatic Cahoots and Paper Lantern are set in the city or in its immediate surroundings. “Image is central to a lot of what I write,” Dybek said. “And for me place is one enormous image.” Dybek was raised in the Pilsen neighborhood of Chicago’s Lower West Side, an area he credits for its influence on both his general outlook as well as that of his writing: “I was in a way very fortunate to be there to watch [Pilsen] go from Slavic to Mexican and it really fashioned my attitude toward America. The place that I was immersed in was not Leave It to Beaver, was not McDonald’s—my allegiance from early on was really to ethnicity and to a sense of foreignness.” As he began to write with Pilsen in mind, Dybek says, writing what he cared about came naturally, organically. “I was writing without even trying, about assimilation, about democracy, about class structure, minority culture, etc.”

Dybek is also a poet; he makes no secret of his love for both genres and their many hybrid forms. (His writer’s notebook is dominated by poetry—everything written in line—and he recalls Raymond Carver’s, when they compared notebooks, being the same way). Maybe it should come as no surprise, then, that reality, as recounted in prose by Dybek-the-poet and grounded in such specific sense of place, should take on the texture of wild cartwheeling dream-like imagination. I’m not still harping on “Córdoba” by the way; in a short discussion with Dybek post-reading, he divulged that “Four Deuces,” from Paper Lantern, is also cribbed from real life. The story—a boozy, dramatic monologue—includes mystical horse-track betting, M-80s, stigmata, and freight-train-hopping, to rattle off what comes to mind. If all that isn’t enough, keep an eye on the cinematography. It jangles.
Posted by The Story Prize at 6:50 AM