Kent Nelson and the Quest for the Right Cover

In the 35th in a series of posts on 2014 books entered for The Story Prize, Kent Nelson, author of The Spirit Bird (University of Pittsburgh Press), talks about the cover of his book and the craft of writing. 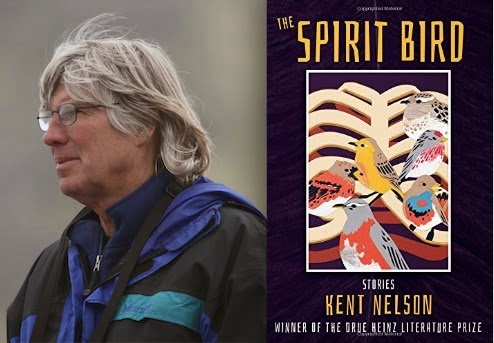 When my publisher and I were discussing the cover for my book, I suggested we look for images that represented the mood of the whole. “What is it?” the publisher asked.

I think of my work as serious, literary, based in various landscapes I know from birding excursions, and with the emotional lives of characters existing below the surface of the dialogue and action. In this collection are stories set in Alaska, New Mexico, Arizona, Colorado, North Carolina, Washington, and California. The protagonists are men and women, young and old. But I couldn’t figure out a mood for the whole. The lead story is about a Mexican boy who comes across the border “to do something great,” which turns out to be growing chiles. And midway is a story about a grieving woman who’s cutting hay. But there’s also a story about a man who turns into a donkey.

In the end, the publisher used the title story as the cover, because birds are a thread that runs through many of the stories in the book, directly in “The Spirit Bird,” but tangentially in other pieces—a man in North Carolina who puzzles over birds, a woman in Seattle who is a bird poet, a runner/glassblower who knows tundra species.

No one can instruct someone else about how to write a story or a novel. A short story to me is a created microcosm of the world, and I love to figure out what is going to happen to my characters in the circumstances I conjure up for them. There’s no formula, no established way to order the events or make up what characters say. I don’t ask myself how I do it, and I don’t want to know.

When I read, I look at stories as having two elements: the plot/characters and the execution of the writing. It astonishes me so few writers (and editors) pay so little attention to the craft. It’s as if they’re playing tennis without lines or basketball without knowing how to dribble. Beginning writers repeat certain words and phrases so often they become an issue for the reader, but famous writers published in The New Yorker and by Farrar, Straus and Giroux or Knopf) do this, too. “Just” is a such a word often repeated. In the last fifteen years it has crept into our speech, but it now pervades our fiction. (There are over 600 uses of “just” in Jonathan Franzen’s Freedom.) “That” is another overused word. (“I saw that she had arrived...”) Other words and phrases that appear over and over are “always,” “began to,” “would” (when applied to the past), “as he/she,” adverbs generally, and verbs of speech followed by a participle (....,” he said, fuming about repetitive word use).

I could go on, but who listens?

I love writing and will do it as long as I can. There is nothing harder I know of, and what could matter half as much?
Posted by The Story Prize at 6:54 PM