Laurence Klavan and the Sense of Unease

In the 44th in a series of posts on 2014 books entered for The Story Prize, Laurence Klavan, author of The Family Unit (ChiZine Publications), relates how a bad experience triggered the writing of his stories. 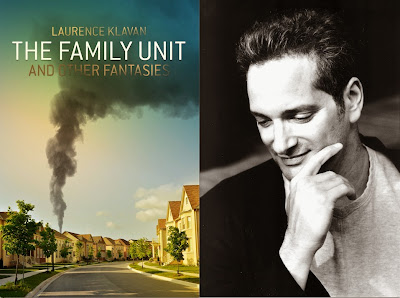 The collection came about because of fear. Most of the stories were inspired by my dread, anxiety, and unease after 9/11.

In November of 2001, my then-girlfriend, now-wife, Susan Kim, and I rented an apartment ninety miles north of New York City. We intended to use it as a kind of bomb shelter where we would flee on weekends. It was in a ragged little ranch-house building complex that resembled a nursing home.

When we first came to look at the place, there was a police car parked outside. The super emerged from behind the building, where woods were. He was carrying a shovel on which we could see a small animal twitching. The cop left his car and went with the other man out of our view, into the trees. We then heard a dull pop. When the two men returned, the cop was holding a plastic garbage bag, tied at the top and weighed down at the bottom. He got into his car with it and drove away.

“Rabid woodchuck,” the super said, with a shrug. “Want to see the apartment?”

We barely decorated it, bought just a table, a futon that doubled as a bed and couch, and silverware and cups; it looked like the apartments that terrorists inhabit while hiding in sleeper cells. (One time, we brought Susan’s cats with us, and they were so terrified by all the empty space that they hid in closets or under the futon cover, looking like three cancerous lumps. All have since died.)

Every day and night, the old woman in the next apartment watched The Sound of Music and smoked cigarettes; smoke seeped through the thin walls and coated our clothing and hair and was impossible to get out. Other animals—raccoons, skunks—haunted the backyard, baying, foraging for food, and leaving their own bad smells behind. Eventually, the super was fired for selling meth and, upon leaving, abandoned the cats he had owned, which joined the other tormented, keening strays behind the house. One night, I sat on the futon and, in the morning, found a gray paté-like substance splattered on the wall behind it: I had inadvertently crushed to death and smeared a mouse there.

While we were gone, phone messages would be left for the same local boy, telling him where and when his Boy Scout meetings were, messages which he apparently never got (or had gotten years before, when he was still alive; that’s what it felt like). One day, when we walked in, we found that the pipes had burst and scalding hot water had sprayed onto the futon where we would have been sleeping; it had bent and melted the candles we left there and curdled the pages of books open on the floor. The next time, a hive of bees hidden beneath our windowsill outside had been jostled loose, and the place was filled with dying bees which had gotten in and couldn’t find their way out. We cleaned up as many as possible but still awoke with bites all over us and more dying bees everywhere.

We ended up feeling unsafe in the place, as if we had brought the danger with us or, wherever we went, we would always find another threat, and so we moved out.

This was where some of the stories came from. I had lived my adult life in cities, and I was antsy in the “exurbs,” as this area is called in New York. Susan saw and heard my disquiet and suggested, exasperatedly, “Why don’t you just—I don’t know—write a story, or something?” I had been writing books, plays, and other scripts and hadn’t written a short story in years. So I gave it a shot.

I wrote animal stories, family stories, working class stories, some but not all set in a version of the town and apartment, most filled (I found at the end; I didn’t intend it) with the unease I felt there, both inside and out. Some of the stories were discarded, others held for a (I hope) later collection. One title for the book was “Bomb Shelters.” I later chose “’The Family Unit’ and Other Fantasies.”

In the end, maybe it wasn’t just the effects of 9/11. Since my childhood had been spent in the suburbs, maybe the town reminded me of being little, and that added to the uncanny and disorienting quality the stories ended up having. But like so many things about the experience, I’m not sure about that.
Posted by The Story Prize at 8:48 AM