Jen Michalski Starts with a Dream

In the 38th in a series of posts on 2014 books entered for The Story Prize, Jen Michalski, author of From Here (Aqueous Books), discusses drawing from real people and situations to fill in stories inspired by dreams. 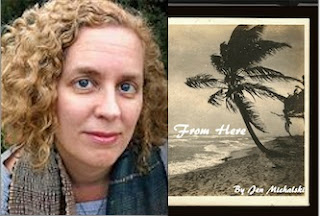 Do you ever borrow characters or situations from real life, and has anyone ever confronted you about it, been angry or pleased?
I find that my writing is a collaborative process. A lot of my stories begin in dreams, and I supply many of the other details through people and situations I’ve known. My dream life is so rich, so powerful, that I find it therapeutic to explore the implications of these loves, these fears and sorrows, in a controlled environment such as writing. Although director David Lynch believes that “waking dreams are the ones that are important” because “when you sleep, you don’t control your dream,” I love the paradox between having no control over the narrative of a dream and then shaping it, dominating it, in waking life.

Perhaps I am working through my own wish-fulfillment or aversion with my dreams, but the vessels into which I inject these feelings usually are real places and people. In the story “The Substitute,” for instance, my high school English teacher did take a half a year off to recover from an illness. It was little discussed and speculated to be anything from prostate cancer to alcoholism. And his son did become his substitute during his winter break from college for a few weeks. Those few weeks stayed with me, not because I thought his son was cute and smart (he was attending Swarthmore, and we lived in a little hick town on the Eastern Shore of Maryland) but because although “Patrick” was only a few years older, he’d crossed that huge divide between high school and college, and I wondered what he thought of us sophomores and juniors, if we were incredibly childish compared with his 21-year-old self who lived now in Philadelphia and saw so much of the “world” (at least compared with us).

When I got the idea to write “The Substitute,” almost twenty years later, I had begun to worry about my own mother’s health intermittently (she had had a serious hospitalization every decade of my life) and how adrift I would feel to lose her at such a young age. “Patrick” returned to me in a dream, and I wondered how he would deal if confronted with the possibility of his father’s death when both were so young, when Patrick, thinking he knew everything as a college junior (as I surely thought I did), would no longer have his father around to guide him through the first job, the first breakup, the first major adult disappointment. I wanted to explore that crossing over into adulthood, where one is tentatively independent but with that independence comes a real fear of loss. I wanted him to take the symbolic mantel of manhood by having his heart broken and by also acknowledging the greatest heartache, the death of parents, yet to come.

Ironically, my own mother died a few weeks ago. It was unexpected, and I was no more prepared for it than Patrick was with the thought of his father’s own. But I guess that’s life; we each have our own instruction manual, and we write it as we live it. We think we may pass it along to others, to our own children, but they must write their own anew.

Will I write a story about my mother’s death, since I didn’t seem to get the closure I’d wanted for myself from “The Substitute?” I probably will, but it will have no resemblance to my mother. It will probably start in a dream and wind up being about a former coworker or a person I notice in the row in front of me at the symphony or in line at the grocery store. Yet it will be so loaded with her essence that I won’t even be able to read it again once I write it.

Oh, my high school English teacher and I reconnected on Facebook about a year ago. He loved the story; we meet for coffee every once in a while. It’s strange to be his age now, when he was my teacher. I feel as if I know so much less now than I did then.
Posted by The Story Prize at 8:00 AM