Vikram Paralkar and the Agent's Letter

In the 49th in a series of posts on 2014 books entered for The Story Prize, Vikram Paralkar, author of The Afflictions (Lanternfish Press), presents a fanciful response to a manuscript submission. 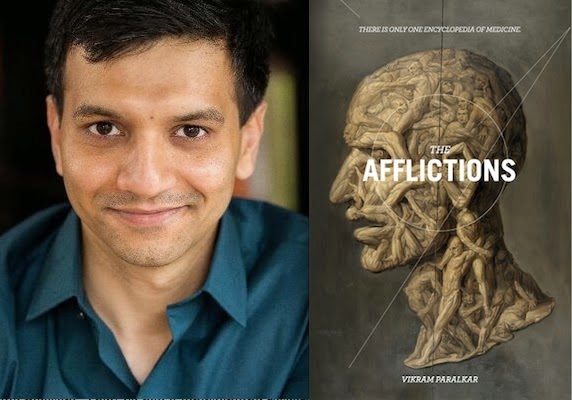 I read your manuscript with great interest. I was in a rocking chair on the back porch of my ranch home, sipping my usual El Injerto coffee and looking over the yellow grass while it rippled in the breeze (as grass is wont to do). Your story started off slow, with some real trouble spots—the murders were insufficiently detailed and the lovemaking excessively so—but after Matilda’s aunt was revealed to be working for the NSA, I felt engaged in the narrative. Enough, apparently, that I didn’t notice the neon glow spreading over the above-mentioned grass.

A theremin-like sound made me look up. As a literary agent, I abhor clichés, and so my feeling was primarily one of disappointment at the sight of that saucer-shaped craft and those beings with bony limbs, bulbous heads, and large black eyes. They took me, which wasn’t unexpected, though I didn’t expect they’d also bring along your manuscript.

Many things happened, and I won’t go into them all here, but I’ll describe the portions that involved your writing. The aliens were actually quite pleasant. They’ve had a long-standing research interest in human cognition, and they asked me to read the rest of your manuscript while they used neural stimulation to alter my mental states. Suddenly, your writing took on an immense significance. Matilda’s gender confusion, Ezekiel’s search for God, Brijesh’s Oedipal urges, all felt terrific in their immediacy. I laughed, I wept, I moaned in terror. I saw greater themes in your writing—the parallels between societal and intimate violence, the lure of the Panopticon, the arbitrariness of sexual morays. I became convinced that you were one of the finest chroniclers of human frailty.

Though my abduction lasted at least a few weeks, the aliens deposited me back on my porch on the same date and time they’d picked me up. Space-time warping, I presume. There were only three proofs of their visitation—my memories, your manuscript (which was now extensively dog-eared), and a sizable crop circle. Hungering for that transcendental feeling again, I dove back into your work. Imagine my chagrin when I found it quite banal. The characters were superficial, cookie-cutter, forced into situations in which they did not belong, and to which they reacted in outlandish ways. All the grand truths I’d seen had vanished, not unlike Matilda’s aunt in the penultimate chapter. In essence, active neural stimulation by aliens was the only thing that had imbued your writing with humanity.

Since that reduces your potential readership to a vanishingly small niche, I regret that I cannot offer you representation at this time. Bear in mind that this is a subjective business, and others may feel differently.

[Literary Agent Name Redacted]
Posted by The Story Prize at 10:29 AM