Joseph Gentile: Eight Things All Writers Should Do at Least Once

In the 34th in a series of posts on 2014 books entered for The Story Prize, Joseph Genitle author of Br'er Rabbit Destroys the Universe (Narmer Books), offers some unusual suggestions for priming the pen. 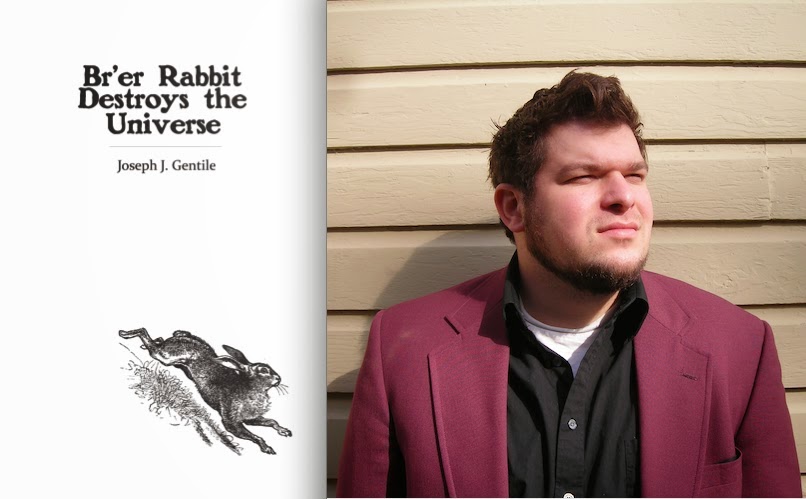 It has been my experience that writing itself is inherently contradictory. On one hand, you want to describe things to your readers so they can identify with what you are saying. But, on the other hand, you want to entertain them with fantastical and novel ideas, making them experience something fresh and exciting. How to combine the two?

The truth is, you can’t be a writer if you lock yourself up in a room all day and watch YouTube videos. (Columbo is pretty good, though.) In order to really master your art, you have to go out and live life. The more experiences you have, the better. That being said, “life experience” doesn’t really come from one or two wacky adventures. You have to be entrenched in something, be it a profession, a mindset, or a lifestyle, to really gain an interesting perspective. Still, a random jolt here or there can be just the thing to really lift up that massive body of experience and set it in lights. With that in mind, here are eight things that I think every writer should do at least once in order to prime the pen.

Show up at your folks place unannounced around three in the afternoon with three giant bags of groceries. Say, “Mama, tonight I’m-a cook you a nice-a supper!” Even if your mom isn’t Italian you should still talk like that. Most moms love Olive Garden so they’ll appreciate the ambiance. Sunday Dinner as a tradition has faded away, and it really is a loss. People are their true selves when eating, so you can learn a lot about a person by the way he or she twirls spaghetti.

This one is great because while you’re composing your ditty, you think that when you unveil it upon your sweetie, it’ll be like a scene in Pretty in Pink or The Breakfast Club where the two lovers finally realize that they were meant for each other and embrace in a passionate kiss that seems to be timeless. What really happens is that your girl will look at you like you are a total putz—which you probably are. She’ll be disgusted with herself, and you might get dumped. This is a fantastic way to learn about how expectations and results can spar with each other. So classic!

• Get in a fistfight.

Truly, there is nothing like popping someone in the face. There is also nothing like getting popped in the face. It’s a startling realization when you learn that getting hit in the nose really isn’t as bad as it looks. It’s really more of a numbing sensation than a painful one. And once it’s over, you will gain an inherent toughness that you didn’t have before. You’ll need that skill because writers need to be tough. Rejection is around every corner. This one works best when you are fighting a real jerk-wad. Please don’t hit nice people.

• Give a nice person twenty dollars.

The fact is, karma doesn’t exist. Terrible, wretched things happen to nice people every day, and plenty of assholes go through their entire life having never once received their comeuppance. I’m sorry you had to learn this, this way. But better here than in the backseat of some car somewhere. So, the next time you see the Denny’s waitress get poo-pooed on by some guy because his Eggs-Over-My-Hammy isn’t fluffy “enough,” add an extra Jackson into your tip. Say, “Thanks for doing a great job!” Walk away before the waitress counts your payment.

• Write Mark Twain a letter telling him how much he sucks.

Actually, I think Mark Twain is the champ. No other author has created such rich, detailed, and dignified portraits of people of various stations—all while skewering himself. But that being said, too often authors are of the mentality, “Boo hoo hoo. I’m terrible at writing.” Shut up. You are great. You’ll never beat Mark Twain at being Mark Twain, but you certainly can beat Mark Twain (or whomever) at being you. What can you do really well that he can’t? Excel at that.

I can’t actually tell you how to do this one because it is a secret. But, believe me, it is totally worth finding out how to do.

Lists are nice. They let you feel like you have some control over the chaos that is this world. (Hint: You don’t.) So, making lists is a great way to organize thoughts and is also a great way to practice plotting. Both skills are essential for writers.

• Swing for the fences

Actually, you should do this one pretty much most of the time. I mean, there’s no shame in taking the easy win once in a while for an ego boost or to pay your electric bill. (“What’s that Mister Editor? You need an article on "The Twelve Cutest Kittens of Autumn"? Does that include Calicos?”) But, for the most part, take some time to look around and see what everyone else is doing. Then try to do something next level. Sure, you’ll crash and burn sometimes. But no matter what, I guarantee that your skills as a writer will improve. And, when you do hit a home run, it’s pretty much the best thing in world.
You’ll forget all about your unfortunate avant-garde, futuristic take on Dracula (with an all Canadian cast!) in a few years. But the times when you nail it? You’ll wear that as badge until the reaper drags you toward the light. In fact, you can even tell about your last great success while he fills out the appropriate paperwork.
Posted by The Story Prize at 6:39 AM