Catherine Browder and the Unmet Mentors

In the 58th in a series of posts on 2014 books entered for The Story Prize, Catherine Browder, author of Now We Can All Go Home (BkMk Books), discusses how great writers have inspired her. 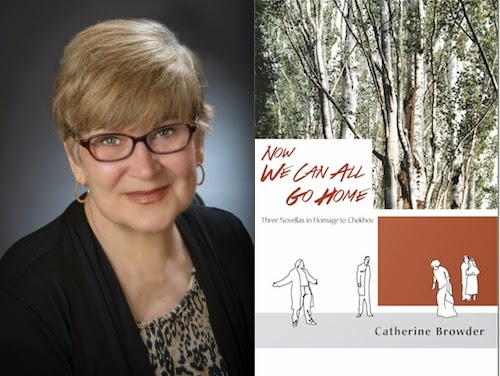 I’m a “late bloomer.” I was 29 and teaching in Japan when I decided to write fiction. While walking to my suburban Osaka train station, I had the thought: This is what I want to do with my life. Besides, not only did I suddenly have the “luxury of time,” but the need: Writing was a way of preserving a sense of my own language, and myself. There were no “writing teachers” except books. Gratefully, we expats took advantage of the British consulate in Kyoto to check out novels, as well as the cheap English language paperbacks at Kinokuniya Bookstore… Odd, that in Japan I discovered Joyce Carol Oats, Grace Paley, Doris Lessing.

But the most significant influence during those overseas years was Katherine Mansfield. After reading her novellas, "Prelude" and "At the Bay," I marveled that you could tell a story this way. I was smitten. Later I learned to what extent she was an innovator—with her child narrators, her meandering and multiple points of view filled with the sensual details of New Zealand, and her canny psychological insights. Much later I discovered how much she’d been influenced by Chekhov. But at the time I wanted to be like her, write like her. So began a period of shameless imitation. If “imitation is the sincerest form of flattery,” then I was guilty of it. Poor dead Katherine: the object of my scrutiny and my love.

(I take comfort in the fact the traditional Chinese landscape painters spent years imitating their masters.)

In his memoir, The Spooky Art: Some Thoughts on Writing, Norman Mailer recounts a visit he made to Nelson Algren’s writing class in Chicago. Mailer writes how dismayed he was at one student’s work, which struck him as “bad Hemingway.” Algren was unconcerned, explaining to an indignant Mailer that imitation was part of the process and would pass. A serious writer, Algren opined, will tire of imitating when he’s established his own voice.

Reading the passage brought to mind my Mansfield years, and I realized to what extent these admired writers (dead and alive) are teaching us how to write. They are our "unmet mentors;" and our own writing is part of a continuing conversation we have with them. In the last few years I’ve sensed this conversation, and mentor-hood, while reading (sometimes for the first time) the works of Edith Wharton, George Eliot, Willa Cather, and Charles Dickens. Try asking yourself: Who are my unmet mentors?

Fast forward to 2006. For two years, as a university teacher of fiction, I was re-immersed in the stories of Chekhov, even the plays. I attended an impressive university production of Three Sisters. For weeks after the performance the plight of the Prozorov family haunted me, especially the youngest daughter. What now for Irina? I needed to find out. Yet the form this inquiry would take struck me from the onset as narrative, not dramatic. I would discover their future lives in fiction—on the page, not on the stage. From Irina, I went on to her sisters and finally her brother. And so began the book, Now We Can All Go Home.

Like his fictional characters, many of Chekhov’s dramatic characters are so compelling, and flawed, it’s hard to say good-bye when the curtain comes down. And so I moved on to Uncle Vanya. Besides, Chekhov ends his plays in the middle of things—we keep waiting for another scene or some sort of resolution. We forget he was an innovator in drama as well as short fiction. He introduced realism with a light touch, where natural sounds and pauses could be heard, and actors didn’t declaim.

Finally, I turned to Dr. Dorn of The Seagull, the only contented man in Chekhov: the ideal narrator.

With each new character it was necessary to reread the play. A new reading, a new discovery. And so the dialogue with my "unmet mentor" continued for five years, traveling through many revisions. The project allowed me to live in the two worlds I feel most at home: short fiction and drama—Chekhov’s worlds. The challenge wasn’t to sound or write like Chekhov. No, the challenge was to imagine a future life for nine characters beloved by many and in so doing, honor them and their creator.
Posted by The Story Prize at 7:08 PM