David Gordon Talks to Himself

In the 63rd in a series of posts on 2014 books entered for The Story Prize, David Gordon, author of White Tiger on Snow Mountain (Little A/New Harvest), discusses a seemingly bad idea that ended up working out well. 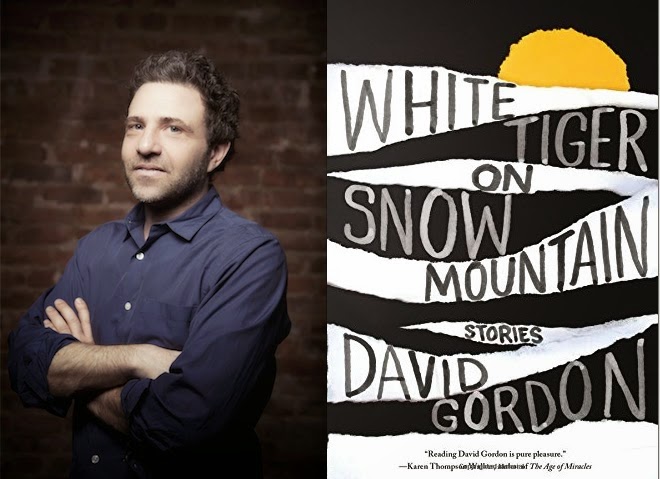 If you weren't a writer, what would you be doing?
That is a terrifying question, the sort that makes me wake up in a cold sweat. In fact, I have never, even as a small child wanted to be anything else, except an astronaut or a spy/criminal—so perhaps I’d be on of those, most likely a secret undercover agent aboard the space station. Still, I’m afraid I’d be what I was for the long years before I found publishers for my work: Someone who worked at a random, low-paying job all day and wrote at night.

Describe an unusual writing habit of yours.
I probably have lots of odd habits, but the one I was reminded of recently was being repeatedly busted walking around and talking to myself. I’ve walked into streetlamps and been caught by an acquaintance standing on the corner and laughing for no reason. I suggested I was on the phone but she said, “No you had your hands in your pockets and you were just laughing.” When I lived on the ground floor in Soho, on a block full of shops, the workers told me they all wondered, “Who is that guy who paces up and down mumbling to himself all day?”

Do you ever borrow characters or situations from real life, and has anyone ever confronted you about it, been angry or pleased?
This is the question I’m “skipping,” only because I already published an essay about this topic and don’t want to repeat myself. The short answer is, no and yes: I was not, in my mind, describing real life, but real live people were both angry and pleased about it anyway.

What's the worst idea for a story you've every had?
The worst idea I ever had actually resulted in “White Tiger on Snow Mountain,” the title story of my collection. Luckily it was also one of the best title ideas I ever had, so that helped. But when I first thought—“I know, I’ll write about a guy who thinks he’s impotent and goes for acupuncture while also chatting anonymously with depraved and desperate women online,” I immediately decided: “Do not write that. Worst idea ever.” Then I thought, “Well, I will just make a few notes.” Then, “Just a first draft. No one ever needs to see it.” That first draft was like 70 pages, which I shaved down to about 45. Then: “Just show your best writer friend and if she says you’re disgusting just destroy it.” As it happens, she thought it was my best story.

What's the best story idea you've had that you've never been able to write to your satisfaction
Undercover agent aboard a space station is sounding pretty good at the moment, actually.

But the story I’ve thought of writing but never have is from the point of view of a cat. But not like a cartoonish, anthropomorphic cat or a children’s storybook cat or a fantasy cat—a real cat. Probably it comes from too much time sitting around, trying to write and looking at cats and wondering what they’re thinking. I look at dogs a lot too, but it is much easier to guess what they’re thinking.

What one story that someone else has written do you wish you had written?
The answer to this is like a math puzzle: Either there are hundreds or none. Part of the oddness of being a writer is knowing that I can never be even a fraction as good as any of the greats who came before me yet still wake up each day in the belief that attacking that story about the cat who is really a secret agent aboard the space shuttle is the most important and urgent task in the world.

Where do you do most of your work?
At my desk in my warm home in my underwear surrounded by my books and looking at the view. I am a lucky man.

What do you do when you're stuck or have "writer's block"?
Get up from that desk and walk around or lie down and stretch on the floor. In fact, (knock on wood), I have never had “writer’s block” in the strict sense of having no idea what to write about. I have had a project going, a story or poem or script or novel I was working on, every day since early childhood and always took it very seriously as a job. But if I am never “blocked” I am constantly “stuck.” That also seems to be an almost daily occurrence, and all I’ve learned over the years is to just keep showing up, as one does for one’s job, and eventually working it out. And that staring into space, reading, pacing, complaining, doodling and despairing are actually part of the process, count as “work” and seem to lead to the next day or week or month when it all unsticks and starts moving again.

What advice do you have for aspiring writers?
The clever move here would be to say “Quit writing and go to law school or join the Peace Corps or something,” knowing full well that real, natural-born writers are immune to advice and will ignore me anyway. But instead I will say all I really can: Read incessantly, learn grammar at least and, (unless you have financial support from family or something) learn some marketable skill. That was my big mistake. I couldn’t even bartend. I knew nothing but how to read and write, so I was doomed.

What else (beyond books and writing) informs or inspires your work?
Assuming you mean culturally, I will say that music and film are absolutely as important to my life and nearly as influential to my work as books and there have been times in my life when I studied them just as obsessively, haunting record shops and jazz clubs or hanging around re-run cinemas and renting two videos a night. I am also fascinated with the visual arts, particularly painting, and find myself reading biographies and watching documentaries about painters more than writers these days. I think there is something about their process that I imagine is rather close to my own, though I was always jealous of my art and music friends for being able to make so much noise and mess.

But taking the question more broadly, anything might help, you can’t tell, so you have to be alert: Taking a walk, shopping, watching kids play, or dogs, or birds. Hearing your neighbors fight. Watching bits of bad TV when you can’t sleep. Nightmares. I love listening to people talk and have always hung out with non-writers who are great tale-tellers: old people, travelers, drinkers, cranks, criminals, liars. Even awful things that seem like a waste of time end up being topics you write about: getting stuck in an airport, working a dead-end job. Even grief teaches us if we are willing to learn. Like Henry James said, “Try to be one of those on whom nothing is lost.” Not even loss, if you can help it.
Posted by The Story Prize at 9:31 PM